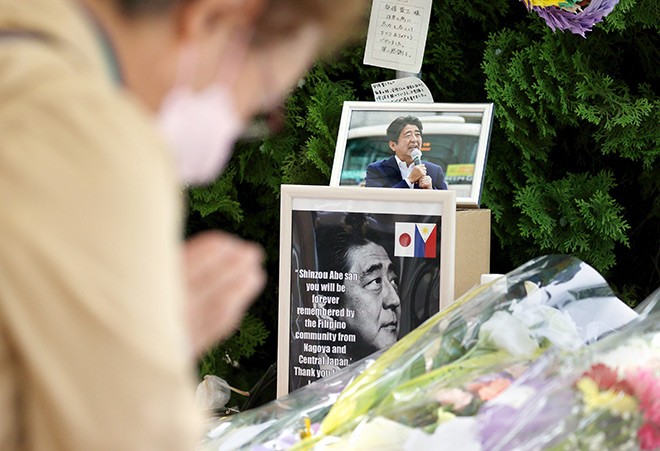 Flowers, messages and photos are offered at a stand set up near the site where former Prime Minister Shinzo Abe was gunned down in Nara on July 8. Photo taken July 15 (Asahi Shimbun file photo)

Shinzo Abe was the longest-serving prime minister in Japan’s constitutional history, but his achievements are highly controversial.

In a break with tradition, Prime Minister Fumio Kishida intends to hold a state funeral for Abe this autumn.

But from his explanations to date, we cannot help but worry that according such special treatment will only widen the gap between those who supported Abe and those who didn’t and hinder an objective evaluation of a political leader.

Kishida made the announcement at a news conference last week, just days after Abe was gunned down while campaigning in Nara ahead of the July 10 Upper House election.

In explaining his proposal for a state funeral, Kishida cited Abe’s longevity in office--eight years and eight months--as well as his efforts to revive the economy and advance diplomacy centered on Japan-U.S. relations.

The cost of a state funeral is borne entirely by the government. However, there are no legal provisions for eligibility, format or procedure. Prior to World War II, an imperial edict existed for state funerals. But it was scrapped in 1947.

In the absence of legal standards, decisions regarding a state funeral are inevitably left to the discretion of the administration of the time.

Former Prime Minister Shigeru Yoshida, who died in 1967, is the only individual for whom a state funeral was held after World War II. He served for more than seven years during the immediate and difficult postwar period and ensured that Japan regained its independence.

More than half a century has elapsed since then.

Eisaku Sato held the longest tenure of seven years and eight months as prime minister before his record was rewritten by Abe.

His funeral was a “kokumin-so” (people’s funeral) hosted jointly by the government, his Liberal Democratic Party and interested members of the public.

In addition to ambiguous legal grounds, the reasons for forgoing a state funeral included the fact that his achievements, unlike Yoshida’s, had yet to be assessed fully in a historical context as Sato died less than three years after stepping down as prime minister.

Since the death of Masayoshi Ohira in 1980, it has become customary for funerals to be hosted jointly by the government and the LDP for former prime ministers. That was also the case even for Yasuhiro Nakasone, whose tenure lasted roughly five years.

The state funeral proposed for Abe is opposed by the Japanese Communist Party, Reiwa Shinsengumi and the Social Democratic Party. The Constitutional Democratic Party of Japan has said it will demand an explanation at a Diet committee session.

Such objections were to be fully expected, but Kishida made his announcement early.

If it was out of consideration for conservative forces in and outside the LDP who supported Abe, Kishida will only alienate himself from broader public support.

In our editorials, we repeatedly and severely called Abe’s policies into question and criticized his political attitude of disparaging the Diet and rejecting dissenting opinions.

The forcible institution of national security legislation in disregard of constitutionalism created a divide in public opinion.

The adverse effects of Abe’s long-term administration were evident in scandals concerning Moritomo Gakuen, the Kake Educational Institution and taxpayer-funded cherry blossom viewing parties, but none of these issues has yet been properly clarified.

Holding a state funeral for Abe will “demonstrate our intention to resolutely protect democracy without bending to violence,” Kishida stated.

Of course, Abe should be mourned. But no one should be forced to mourn in any prescribed manner.

A state funeral is not a gauge for evaluating an administration. Should it give rise to an atmosphere of intolerance for free speech, that in itself will spell a crisis for democracy.