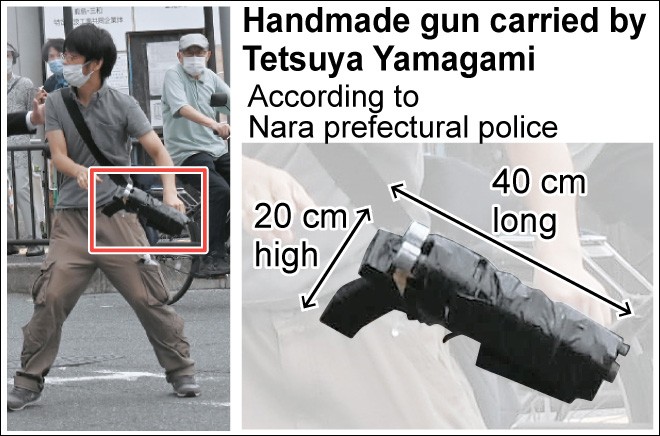 The homemade gun used in the shooting of former Prime Minister Shinzo Abe apparently employed an electrical charge to ignite homemade gunpowder that would then fire off a volley of conventional ammunition.

The gun was seized at the scene where Abe was shot while delivering a campaign speech in front of the Kintetsu Line’s Yamato-Saidaiji Station on July 8.

A small battery was equipped under the two loaded barrels, investigative sources said.

The batteries were connected to the homemade gunpowder with electrically conductive lead.

Police believe that Yamagami activated the batteries to transmit electricity to the gunpowder to ignite it.

The size of each of the six shots was about 5 millimeters to 1 cm in diameter.

Police also found two guns in the works. All of the seven guns resemble the homemade gun seized at the shooting scene.

Yamagami told investigators that he started making guns last year and had learned how to make them from YouTube instructional videos, according to sources.

Yamagami told police he tested these guns “in the mountains” more than 10 times, sources said.

Police have searched various sites based on his statements and have found wooden boards with holes, along with concrete blocks, metallic barrels and plastic pieces that appear to be parts of shell casings.

Yamagami made many prototypes and tested them to produce a gun with highly lethal force, police said.

Police also said Yamagami rented a garage with a shutter in Nara Prefecture from around November 2021 to February this year.