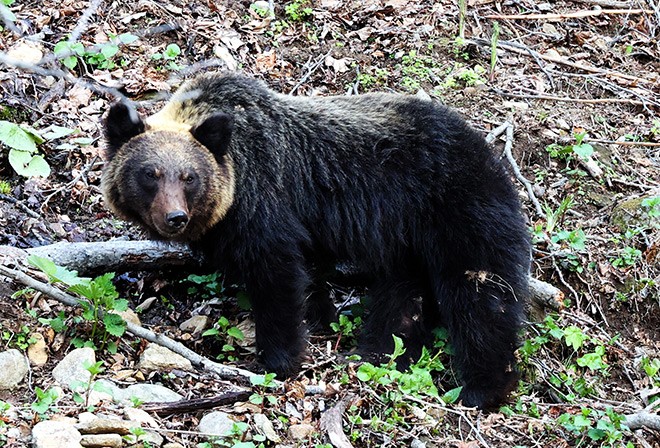 A brown bear, not “RT,” eats plants on a cliff in Shari, Hokkaido, on April 28. (Wataru Sekita)

RAUSU, Hokkaido--Hunters killed a brown bear dubbed “RT” that was blamed for the deaths or injuries of eight pet dogs during a four-year rampage in this northern town.

The animal, a male, was advanced in age, estimated to be around 12-13. The meager bear weighed about 200 kilograms, but in its prime it may have weighed more than twice that, said a member of the hunting party.

News that RT is dead was welcomed by town residents, but authorities are calling on them to remain alert as bear sightings have increased in recent months.

The bear was nicknamed “Rusha Taro,” RT for short, after the Rusha district of the neighboring town of Shari, where the animal was first spotted.

Rausu and Shari are both located in the Shiretoko Peninsula in eastern Hokkaido, an area of outstanding natural beauty designated a World Natural Heritage site.

Five dogs were killed in Rausu between 2018 and 2020 during four separate brown bear attacks, all in summer. In late June last year, another dog was killed and two were mauled in the grounds of a house.

DNA tests on saliva and hair samples on the dogs showed that the attacks were carried out by the same animal.

On June 29, a trail camera in Rausu captured footage of a bear that appeared to be RT, prompting the town office and Shiretoko Nature Foundation to set up a box trap in a nearby mountain area the following day.

An adult male brown bear found in the trap was electrocuted on July 11.

The bear’s DNA samples examined at Hokkaido University came up with a match for RT on July 14.

In December, an adult male brown bear weighing a massive 425 kg was killed in Rausu by members of the Hokkaido prefectural hunting association.

Fisherman Kenji Sakurai, 59, head of the Rausu division of the association’s Nakashibetsu branch who assisted in the hunt, had long taken part in the efforts to track and kill RT.

In July 2019, he barely escaped with his life when RT suddenly appeared in front of him.

Sakurai, who watched RT’s body after it was dismembered, said the bear was “skinny but had very thick bones.”

Years ago, when it was in peak physical condition, RT could have been as big as the animal killed in December, he said.

“The bear had rotten teeth,” Sakurai said. “I think it had difficulty feeding itself due to its age and ended up coming to town to eat garbage and target dogs.”

He added the aging animal could have been doomed to die of hunger or be killed by another brown bear.

Bear sightings in Rausu totaled 125 between April and June, up sharply from the 78 during the same period last year.

“Even though RT is dead, we cannot let down our guard with regard to bears,” a town official said. “We urge residents to take thorough measures to keep bears away, including not leaving garbage or sun-dried fish outside.”