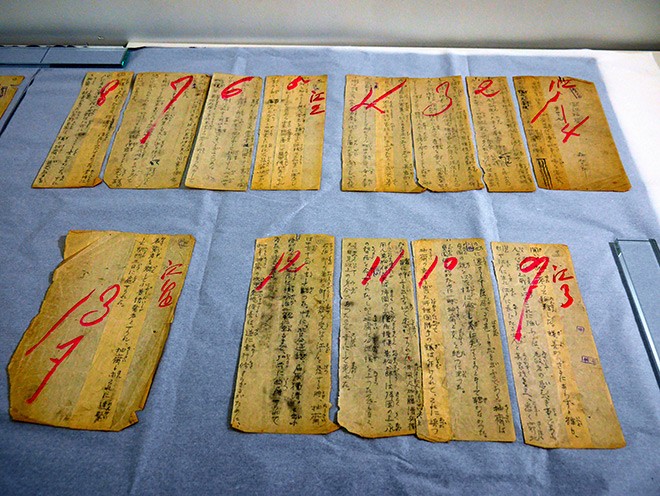 Part of Mori Ogai’s autographic manuscript for the 49th installment of “Shibue Chusai,” divided and numbered in red during the process of typesetting for newspapers (Kensaku Nonami)

Recently discovered autographic manuscripts for “Shibue Chusai,” a work that some say represents the high point of author Mori Ogai’s literature, are being hailed as a valuable find.

Traces of rewriting and improvements left on the sheets of Western paper offer insights into the writing process of Ogai, who was born in 1862 and died exactly a century ago, experts said.

The Mori Ogai Memorial Museum in Tokyo’s Bunkyo Ward said July 14 the documents are among the few known manuscripts of Ogai’s own writing for his stories.

A key work from Ogai’s later years, the story is a full-length biography of Shibue Chusai (1805-1858), a physician and philologist who served the Hirosaki feudal clan in the waning years of the Edo Period (1603-1867). It was written based on scrupulous research.

“The find can only be described as an unexpected stroke of good luck,” said Kazuhide Yamazaki, a scholar of Ogai's works and chief director of the Atomi Gakuen educational institution. “I feel as if I witnessed the moment the work was born.

“You might think he wrote his works without much difficulty, but Ogai apparently went to considerable pains writing this fact-based biography.”

“Shibue Chusai” was serialized in the Tokyo Nichi Nichi Shimbun and another newspaper between January and May 1916. It was later included in the complete collection of Ogai’s works following text improvements and revisions.

The manuscript for the 50th installment shows how a full sentence, about 50 characters, was added in black ink before the text went to print in the newspapers.

The 49th and 50th installments were found divided into 13 and 11 sheets of paper, 20 centimeters in depth and each numbered in red, during the process of typesetting for the newspapers.

The museum was approached in autumn last year by a hereditary owner of the manuscripts, who wanted them to be stored at the facility dedicated to the author.

An expert commissioned by the museum identified the documents as genuine. The Bunkyo ward government, which operates the museum, compiled a special budget and purchased the manuscripts for 2.8 million yen ($20,300).

The majority of Ogai’s autographic manuscripts remain unaccounted for, except for a few, including those for the short story “The Dancing Girl,” one of the most important works from his early career as a writer.

No other autographic manuscripts for “Shibue Chusai” have been found until now.

The newfound manuscripts will go on display as part of “Ogai legacy,” a special exhibition to be held at the Mori Ogai Memorial Museum from Oct. 22.