EDITORIAL: Japan and South Korea off to a good start in mending ties 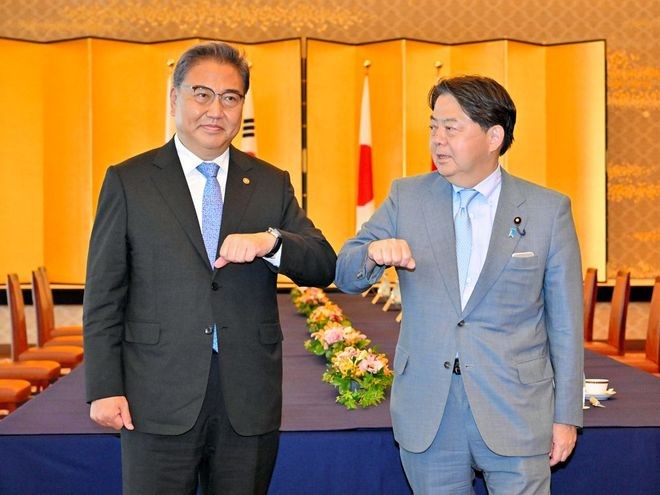 Japan and South Korea engaged in their first full-fledged dialogue in ages on July 18, a sign that the two neighbors are finally trying to heal the extraordinary rift in their bilateral ties.

South Korea’s new administration and the Japanese government must build on the momentum with a succession of prudent diplomatic decisions.

It was South Korean Foreign Minister Park Jin’s first visit to Japan since President Yoon Suk-yeol took office in May and also marked the first trip to Japan by a South Korean foreign minister to discuss bilateral matters in about five years.

Park also held a series of meetings with a number of Japanese politicians and officials, including Fukushiro Nukaga, the Liberal Democratic Party lawmaker who heads the Japan-Korea Parliamentarians’ Union, a group of lawmakers working to improve bilateral ties.

His visit set a positive tone for the Yoon administration’s diplomacy toward Japan.

The challenge for both governments is how to build on the good start and use the momentum to come up with specific proposals to untangle the thorny issues that sent bilateral ties into a nosedive.

No such proposal, however, was discussed while Park was in Japan, leaving the impression that bilateral efforts to fix the relationship have barely started.

Clearly, the most serious and complicated of the bilateral issues is the dispute over compensation for former Korean wartime laborers. This festering sore in the Tokyo-Seoul relationship was apparently the central topic of the Hayashi-Park meeting. South Korean courts have ordered Japanese companies which drafted Koreans to work for them during Japan’s colonial rule of the Korean Peninsula to pay compensation to the victims.

The seized assets of these Japanese companies could be sold for cash as early as this summer. If that step is taken, the Japanese government will undoubtedly take strong retaliatory actions.

During his meeting with Hayashi, Park reportedly said the South Korean government will try to hammer out a “desirable solution” to the issue before the assets are cashed out. Park’s promise can be seen as an expression of the South Korean administration’s commitment to fulfill its responsibility to avert a diplomatic crisis.

But there will still be twists and turns in the process of searching for a lasting solution to the issue. The South Korean government set up a new consultative body earlier this month to sort out the issue. It is comprised of people from the government and the private sector, including former drafted workers. But the move has already provoked a backlash among some victims.

Figuring out a formula to settle the international dispute and at the same time win the consensus of the domestic parties involved is a formidable challenge for the Yoon administration. We call on Seoul to come up with the appropriate political decisions to make that happen.

But there is also something the Japanese government should do. Japan has expressed remorse and apology over its colonial rule of the Korean Peninsula. But Tokyo should be humble enough to reiterate officially that it has not changed its stance toward Japan’s wartime past.

The international situation is in flux with Russia waging war in Ukraine and North Korea firing missiles from time to time. Japan and South Korea, which have common security interests, can ill afford to allow their relations to remain soured.

Instead of putting the onus entirely on South Korea to improve bilateral ties, Kishida should exercise effective political leadership to build a good working relationship with the Yoon administration. That would also help improve the international environment surrounding Japan.

One important date concerning history issues between the two countries--Aug. 15--is looming. For Japan, it marks the anniversary of its defeat in World War II. South Korea calls it “National Liberation Day” to celebrate its liberation from Japanese rule.

With this landmark date in mind, we urge the leaders of the two countries to start in-depth dialogue to improve bilateral relations.

We hope Kishida and Yoon will take effective actions to ensure there is an “acceleration of talks” that their foreign ministers agreed on in Japan.