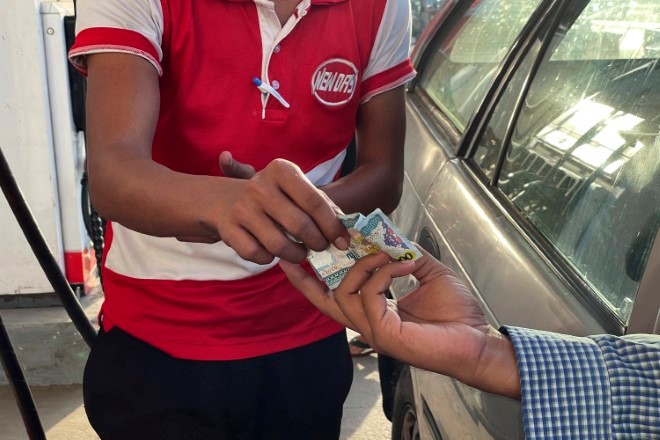 A driver hands over Myanmar kyats to an attendant as payment for fuel at a gas station in Botahtaung township in Yangon, Myanmar on Nov. 12, 2021. (AP Photo)

Conditions have improved since last year, right after the military ousted the elected government of Aung San Suu Kyi, but the country “remains a long way short of a recovery,” said Kim Alan Edwards, a senior World Bank economist.

Myanmar is one of several countries in Asia, also including Sri Lanka and Laos, whose economies are imperiled by soaring prices and weaker currencies. A military takeover in February 2021, on top of the pandemic, has reversed a decade of reforms and strong economic growth, leaving 40 percent of the population living in poverty.

“Inequality is estimated to have worsened, with those already poor falling into deeper destitution,” the World Bank said in its latest update.

Opinions differ over the state of the economy, partly because of a lack of access to up-to-date information following the military’s seizure of power.

The World Bank is forecasting that the economy will have grown at a 3 percent annual pace in the fiscal year that ends in September, following an 18 percent contraction the previous year.

In a separate report, Fitch Solutions put growth in the current fiscal year at minus 5.5 percent, recovering to 2.5 percent next year. It said it did not expect the economy to recover to a pre-pandemic level for at least another six years.

Myanmar has been ruled by the military for most of the past 70 years. The army’s takeover interrupted a gradual transition toward democratic civilian government and a more modern, open economy and drew a slew of sanctions against the military, which controls many industries.

Foreign investment has largely collapsed and many foreign-owned businesses have withdrawn, including major energy companies like France’s Total SA and Telenor of Norway.

Manufacturing has recovered somewhat after many factories were idled due to coronavirus outbreaks and massive protests against the military following its takeover, Edwards said. But workers generally are getting fewer hours and lower wages.

Banks, meanwhile, are better able to access cash than during the first months after the army took control, he said, but credit is scarce.

The exact state of Myanmar’s foreign exchange reserves is unclear since the last official data were from late 2020, when they were estimated at about $6 billion-$7 billion. About $1 billion are known to have been frozen by U.S. sanctions.

Given the lack of tourism revenues, weaker export earnings and surging costs for imports of oil and gas and materials needed for manufacturing, it’s “quite likely the reserve situation has deteriorated quite severely,” Edwards said.

“There’s not a lot of clarity,” he said, though he said he did not believe Myanmar’s reserves had fallen on the same scope as those in Sri Lanka, where the economy has collapsed, causing a political upheaval, as the country has run out of funds to pay for vital essentials such as food, fuel and medicine.

To try to conserve precious hard currency, especially U.S. dollars, Myanmar’s central bank has issued several orders requiring businesses to deposit any such holdings into banks and convert them to the local currency, kyats, at much worse than the unofficial rates.

Meanwhile, it is Myanmar’s poorest who are suffering the worst impacts of the crisis, especially those living in rural areas where armed civilian resistance forces are fighting the army.

The World Bank report said 20 percent of all businesses it surveyed and 40 percent of agricultural businesses said the conflict was their biggest challenge, disrupting farming and shipments of produce to markets.

But a 70 percent jump in the price of fuel and higher costs for fertilizer and transport also are taking a toll, it said.

“With regard to agriculture, the bottom line is we don’t think the worst is past,” Edwards said.