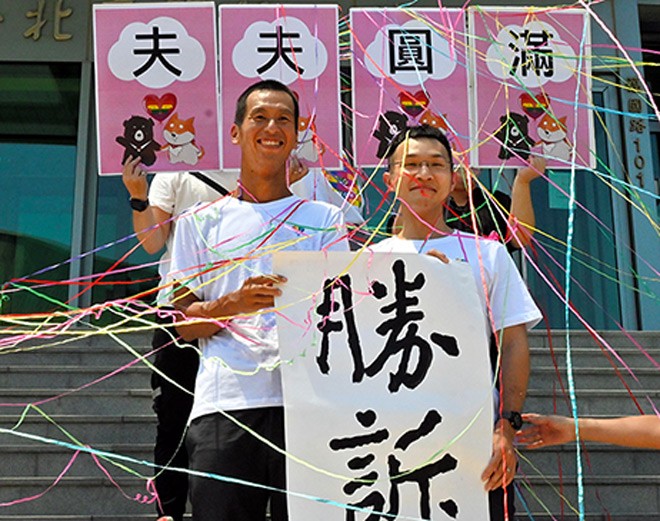 TAIPEI--The Taipei High Administrative Court ruled on July 21 that the marriage of a Japan-Taiwan same-sex couple should be legally recognized in Taiwan, even if it is not legal in Japan.

The plaintiffs were two male residents of Taiwan: Eizaburo Ariyoshi, 42, a Japanese language teacher, and Lu Yingren, 34, a psychology counselor.

“I am happy the ruling recognized I am no different from a heterosexual person,” Ariyoshi said.

Taiwan legalized same-sex marriages in May 2019, the first to do so in Asia.

But another law concerning marriage and other judicial proceedings involving foreigners stipulates that international same-sex couples are only allowed to marry if the countries where the foreign residents in question came from have also legalized same-sex marriage.

“I had thought marriage was impossible for me, a gay person,” Ariyoshi said.

Ariyoshi and Lu held a wedding ceremony in May 2019, immediately after the legalization of same-sex marriage in Taiwan.

But when they filed their marriage certificate at an office in Taipei in May 2021, it was denied because Japan, Ariyoshi’s country of origin, does not legally allow same-sex couples to marry.

They filed an administrative lawsuit in December 2021, arguing it is illegal to deny marriage to them and demanded the office in Taipei that refused to accept their marriage paper retract the decision.

“Refusing to approve a same-sex marriage (to them) in keeping with the Japanese system and discriminating against (them) violates Taiwan’s legal order,” the high court said in its ruling.

The court urged the office to accept the couple's marriage certificate.

The office in Taipei will decide within 20 days after it receives the ruling statement if it will file an appeal.