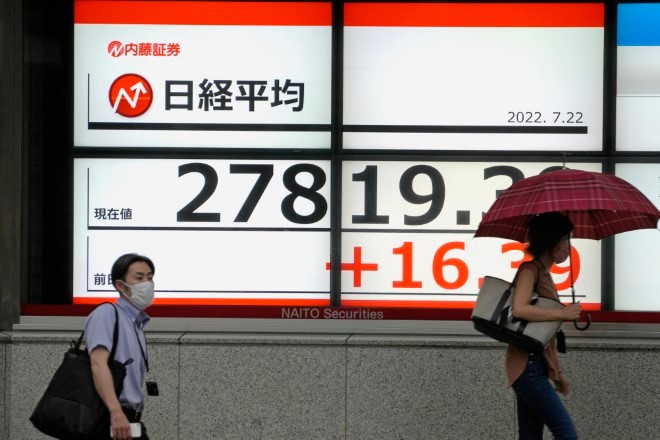 People walk past an electronic board showing the Nikkei 225 stock index at a securities company in Tokyo on July 22. (AP Photo)

BANGKOK--Asian shares were mostly higher on Friday after another day of gains on Wall Street amid a deluge of news about the economy, interest rates and corporate profits.

Japan reported its inflation rose at a slower pace in June, with food prices growing 6.5 percent year-on-year compared to 12.3 percent in May and the increase in energy costs falling to 16.5 percent from 20.8 percent. Core inflation excluding volatile energy and food prices rose to 2.6 percent from 2.2 percent the month before.

The Bank of Japan has indicated that unlike the Federal Reserve and other central banks, however, it does not intend to raise its minus 0.1 percent benchmark interest rate to counter the trend given that wages are not rising in tandem with prices, constraining consumer demand.

A preliminary reading on factory activity for Japan showed output and new orders contracting to their worst levels in months. Companies blamed shortages of raw materials and rising costs.

Much of the focus this week has been on Europe. The European Central Bank opted, as expected, to raise its key interest rate Thursday, ending a yearslong experiment with negative interest rates. It was its first increase in 11 years.

A key pipeline carrying Russian natural gas into the region reopened, though at 40 percent of capacity as worries persisted that Moscow may restrict supplies to punish allies of Ukraine. In Italy, Premier Mario Draghi resigned after his ruling coalition fell apart. That adds more uncertainty as Europe contends with the war in Ukraine, high inflation and the potential for trouble in Europe’s bond markets.

The Federal Reserve is set to raise rates next week for a fourth time this year, once again trying to tamp down high inflation without pulling the economy into a recession.

Some parts of the U.S. economy already have begun to soften.

The number of workers who filed for unemployment benefits last week was the highest in eight months, though it remains relatively low. A separate report released Thursday showed manufacturing in the mid-Atlantic region weakened much more than economists had expected.

Tesla climbed 9.8 percent in the first trading after the electric-vehicle maker reported results for the spring that were better than analysts expected. It was the biggest gainer in the S&P 500.

United Airlines tumbled 10.2 percent after its profit and revenue fell short of expectations. It also scaled back its plans for growth later this year. American Airlines fell 7.4 percent after it reported weaker earnings than expected, though its revenue topped forecasts.

AT&T sank 7.6 percent even though it reported better profit and revenue than Wall Street forecast. It cut its forecast for the amount of cash it will generate this year.

Early Friday, U.S. benchmark crude oil was up 85 cents at $97.20 per barrel in electronic trading on the New York Mercantile Exchange.

Brent crude, the pricing basis for international trading, advanced 75 cents to $100.23 per barrel.