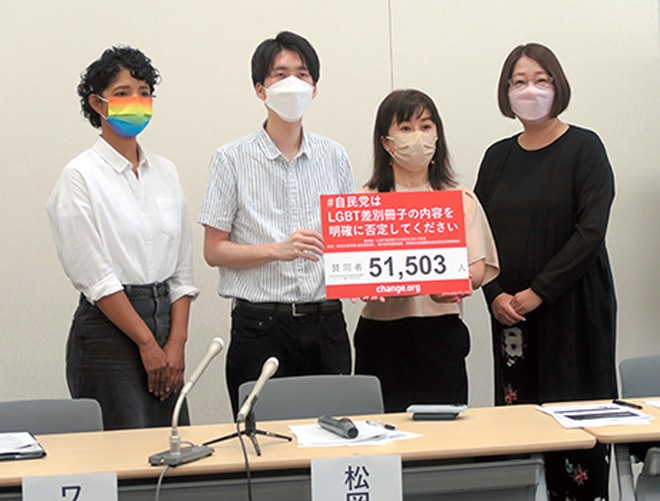 Members of a group protesting a pamphlet that contains discriminatory statements about sexual minorities hold a news conference in Tokyo on July 25. (Satomi Sugihara)

A group of sexual minorities and their supporters submitted a petition with about 51,500 signatures to the ruling Liberal Democratic Party protesting a pamphlet that describes homosexuality as an “acquired psychological disorder.”

“The statements (made in the pamphlet) are clearly discriminatory and outrageous,” said Soshi Matsuoka, 27, who heads Fair, an organization that provides support to sexual minorities, at a news conference the group held in Tokyo on July 25.

The pamphlet was distributed at a June 13 gathering held at a Tokyo hotel of party lawmakers belonging to a group who share a similar ideology to that espoused by Shinto Seiji Renmei (the Shinto Association of Spiritual Leadership).

The document contained excerpts from speeches that university professors gave during study sessions organized by the association, made up of thousands of individuals affiliated with Shinto shrines around Japan.

The pamphlet states homosexuality is an “acquired psychological disorder” that is just as addictive as gambling. It also says to the effect that conversion therapy or religious faith can change such a sexual orientation.

The LGBT support group collected the signatures in an online petition drive launched on July 2 and mailed them to the LDP and the group of lawmakers who sympathize with Shinto Seiji Renmei.

In the petition, the organizers demanded the LDP reject the biased statements regarding sexual minorities made in the pamphlet and show its commitment to eliminating discrimination against LGBT people.