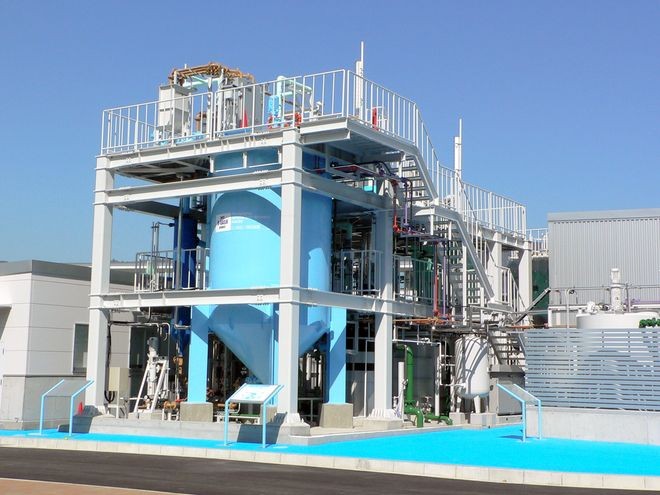 This equipment in Kobe is used to recover phosphorus from sewage sludge. (Provided by the Kobe city government)

Skyrocketing prices for chemical fertilizers have sent officials looking to other valuable, if unappetizing, resources that are readily available in Japan to help grow food.

While prices are climbing higher and higher, their search has taken them in the other direction--down. Way down.

It turns out that human waste from our sewers--the stinky stuff cities usually pay to get rid of--is an abundant natural resource, packed full of essential nutrients for plant growth, once it gets processed.

“Sewage sludge is a mine of treasures,” said an official with the land ministry.

And farmers are increasingly being priced out of getting those treasures from other sources because of geopolitics.

Farms normally use hefty amounts of chemical fertilizers packed with nitrogen, phosphorus and potassium--the three major nutrients essential to the growth of plants.

But phosphorus, one of the key raw ingredients, is extracted from natural ore, which is distributed unevenly across the world. Until very recently, Japan has relied on China for about 90 percent of its imports of the element.

Phosphorus imports from China began to slow last fall, with some sources speculating that is because China is imposing export restrictions to give preference to domestic demand.

Russia’s invasion of Ukraine has meanwhile pushed up the prices of nitrogen fertilizers, which are made from natural gas and other raw materials, and potassium fertilizers, which Japan used to make from raw ingredients imported from Russia and Belarus.

The National Federation of Agricultural Cooperative Associations (Zen-Noh), the leading distributor of fertilizers in Japan, raised the wholesale price of standard fertilizer by about 50 percent in June.

Enter sewage sludge, the mud-like substance generated during the waste-purification process, which is rich in phosphorus and nitrogen.

And all the daily sewage that Japan generates adds up.

Land ministry figures show that every year, Japan’s more than 2,000 sewage treatment plants produce 2.3 million tons of sludge. That vast amount contains some 51,000 tons of phosphorus components--20 percent of what is used in agriculture across Japan, officials said.

“The subject is drawing attention on the food security front as well,” said Hiroshi Iwama, a farm ministry councilor in charge of the matter. “The tide is turning.”

In May, a panel made up of members of the ruling Liberal Democratic Party tasked with discussing food security recommended a “more extensive use of alternative raw materials that are available domestically, including sewage sludge” to help cope with soaring fertilizer prices.

But many farmers are loath to swap their standard fertilizers for sewage sludge because of how gross that sounds. The negative image of feces in the minds of the public and among farmers has been the major reason the farm ministry has long lacked enthusiasm for using it.

The ministry’s “Strategy for Sustainable Food Systems,” which it drafted last year, said the government aims to reduce reliance on chemical fertilizers and mentioned the use of sewage sludge as a possible alternative.

The Saga City Sewage Purification Center, located in the capital of Saga Prefecture, began turning it into fertilizer in 2009. Workers spend about two and a half months maturing the sludge at a plant next door.

It sells to citizens for 20 yen (15 cents) per 10 kilograms. It had previously cost the city government 100 million yen a year to dispose of the sludge as industrial waste.

But harvesting it for manure is not problem-free. And it is not the only thing floating around in the sewage system. While E.coli and other microbes die out during the high-temperature fermentation process, heavy metals, such as mercury and lead, remain even after processing.

The farm ministry sets the legal limits for toxic substances in fertilizer.

The content of heavy metal elements in sewage has been on the decline in recent years, but sewage sludge remains unsuitable for use in fertilizer in certain areas, particularly industrial zones.

But some methods for chemically extracting phosphorus have proven effective in these areas, and one process for recovering it was commercialized in 2020 in Kobe, Hyogo Prefecture.

Kobe’s method involves adding magnesium to sewage sludge to extract crystals of magnesium ammonium phosphate. The crystals are sold to fertilizer makers for 45 yen per kg. Officials said there is no risk of contamination with heavy metals.

“We hope to publicize the safety of our product and further increase sales,” a city government official said.

Reusing human sewage is actually an age-old agricultural technique in Japan, but was abandoned in modern times.

Noriko Yuzawa, a professor of agricultural history with Hosei University in Tokyo, said the practice became popularized in the mid-Edo Period (1603-1867).

Yuzawa, who authored the book “Unko wa Doko kara Kite, Doko e Iku no ka” (Where does poop come from and where does it go?), said that human waste was traded at high prices as a raw material for manure.

Human manure continued to be used for some time into the postwar period, but the practice faded quickly during the U.S. occupation of Japan and as sewage systems were developed in the runup to the 1964 Tokyo Olympics, Yuzawa said.

“People in Britain and other countries were previously flabbergasted to learn that human manure was used in Japan, but sewage-sludge fertilizer is becoming more common in those countries,” she said. “The use of sewage sludge tends to be shunned in everyday life. It is essential to start with broad-based discussions by citizens on the matter.”