Communist Party of China battles to smash the glass ceiling 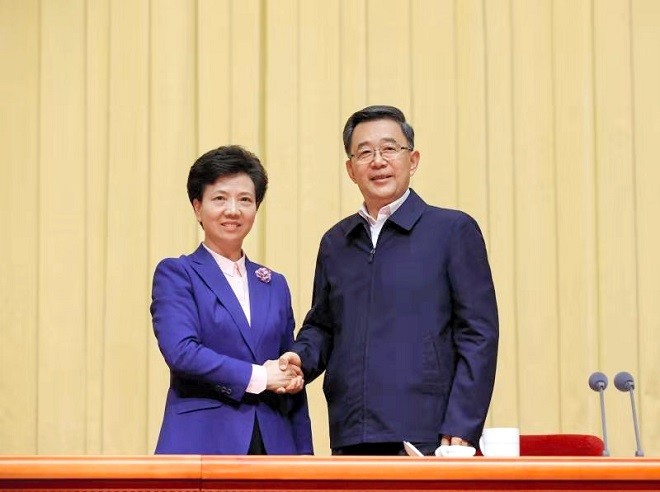 BEIJING--Even the all-powerful Chinese Communist Party has come unstuck on the issue on the issue of gender equality in its hierarchy, a core principle of its founding ideology.

As the face of modern China, the CCP is committed to promoting more females to the ranks of top executives under its long-held “women’s liberation” policy.

Currently, only one woman, party veteran Sun Chunlan, holds the privileged position of membership in the 25-strong Politburo.

But Sun, who turned 72 this year, is expected to retire this fall. A number of female candidates are waiting in the wings as possible replacements; beyond that, though, there appears to be little prospect of a significant increase in female representation.

A key issue for the party’s congress scheduled for this autumn is deciding how many female senior officials will join the renewed governing body. Given deep-rooted patriarchal ideology, it remains unclear whether Beijing will be able to break through the glass ceiling.

Sun, a vice premier, is in charge of issues connected to hygiene and education and held in high regard for her fight against the COVID-19 pandemic.

When the novel coronavirus outbreak first flared in Wuhan, Hubei province, she immediately visited the city ahead of its January 2020 “lockdown.” The city was sealed off for months following the first confirmed cluster infections.

Working as an executive responsible for the COVID-19 crisis, Sun is affectionately dubbed “Grandma Sun” by social media.

Shen Yiqin, 62, who is the party’s committee secretary of Guizhou province in southwestern China, is viewed as likely to replace Sun in the Politburo. In November 2020, Shen became the first woman in six years since Sun to be assigned to a province’s top position.

As Shen is from the Bai ethnic minority group, her background is deemed to work “in her favor” in terms of climbing the ladder under the party’s multi-ethnic unification campaign, according to a Communist Party source.

But one factor that could cloud her future is that she carved out her career exclusively in Guizhou.

Shen Yueyue, 65, a vice chairwoman of the standing committee of the National People’s Congress, or China’s parliament, is known to be held in high regard by paramount leader Xi Jinping.

On July 1, she accompanied Xi on his trip to Hong Kong to mark the 25th anniversary of the former British colony’s reversion to Chinese sovereignty.

Yu Hongqiu, 61, a deputy secretary at the Central Discipline Inspection Commission, who is staunchly attached to Xi’s flagship “anti-corruption” campaign, is seen as another candidate to take over from Sun.

But none of the women can boast decisive achievements that mark them out as potential new Politburo members. For that reason, many women will not find seats in the Politburo, according to a party insider.

“The number of female Politburo members will not be reduced to zero, given the current social situation where the emphasis is placed on women’s rights,” the source said. “But appointing a single woman will likely be thought of as enough.”

The Constitution of the Chinese Communist Party stipulates that priority should be given to developing and selecting female executives within the party.

But no women have ever secured positions in the Politburo’s Standing Committee that put them in reach of the nation’s top leadership position in the CCP’s 101-year history.

Only six women, including Sun, have worked in the Politburo, who represent the cream of the crop after Xi and close associates.

Of them, three were the wives of Mao Zedong, Lin Biao and Zhou Enlai, Chinese leaders from the revolution generation. No women were elevated after them during the 1990s.

In an “opinion” released in 2001, the party’s Central Organization Department specified the numerical goal of raising the female ratio to 10 percent among senior official candidates in party-relevant entities in province-level areas and the state.

Wu Yi became a Politburo member in 2002 and led the fight against the SARS (severe acute respiratory syndrome) outbreak the following year as a vice premier. Two women were included in the bureau members’ list in 2012.

The percentage topped 10 percent in 1973 during the Cultural Revolution. This shows that the elevation of women to executive positions has seen little progress since then.

Referring to an old saying, a party insider offered an insight into why the situation has not improved as drastically as had been hoped, although the CCP remains sincere in its embrace of more senior female representation.

The proverb literally means hens replace cocks to herald the arrival of morning, which is taken to mean that having women in control of the nation will result in a horrible political mess.

It is said to be based on the story of Emperor Zhou of the Yin Dynasty, a tyrant in his time who attached great importance to the opinions of his favorite consort, a woman named Daji. The emperor’s wayward ways led to the collapse of the dynasty.

“A biased view against promoting women persists in China, as illustrated in this saying,” the party insider said.

The traditional gender stereotype in China is contributing to the protection of the glass ceiling even today, even though that does not match the socialist ideal.

Kazuko Kojima, a professor of modern Chinese politics at Keio University’s Faculty of Law in Japan, noted that women in China can gain promotion only in certain fields, such as education, culture and hygiene.

“Not only the glass ceiling but the glass wall still exists,” she said.

According to Kojima, traditional social norms about the separation of roles between men and women and other topics have not changed, even though the CCP has been trying to beef up women’s involvement in politics by setting targets.