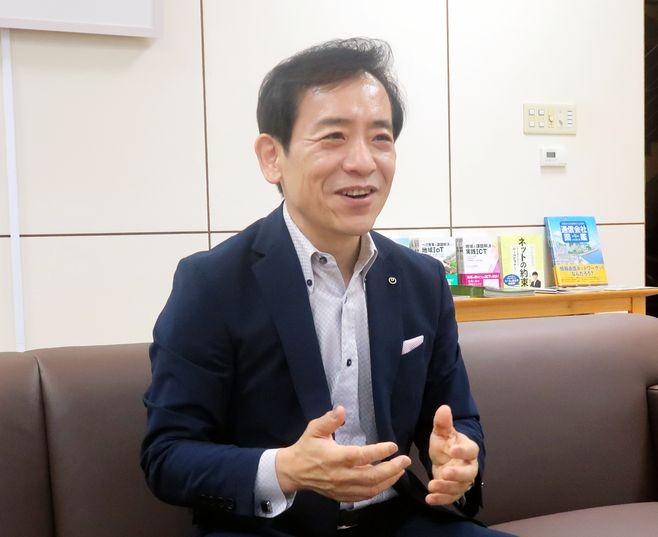 Naoki Shibutani, president of Nippon Telegraph and Telephone East Corp. (NTT East), responds to a question during an interview with The Asahi Shimbun at the telecom giant’s headquarters in Tokyo. (Yasuro Suzuki)

The option was disclosed by Naoki Shibutani, president of NTT East, during an interview with The Asahi Shimbun.

His remark came on the heels of a massive network breakdown involving rival KDDI Corp. that prevented users from making emergency calls in early July.

Emergency-use public phones, which are unavailable for use in normal times, would be opened up for free public use as a means of emergency communication when disaster strikes.

The telephones are installed at elementary and junior high schools, community centers and other facilities.

With the advent of smartphones and other mobile devices, the NTT group has been removing regular pay phones from streets and elsewhere. Just 138,000 were still operating in March, down by about 40 percent from 10 years earlier. In the interim, it increased the number of emergency-use public phones by nearly 10-fold to 88,000.

At the time of the 2011 earthquake and tsunami disaster that devastated areas of northeastern Japan, Shibutani spearheaded recovery efforts for the communication network as NTT East’s Fukushima branch manager. He said the experience was the making of him.

“If we are asked to put (emergency-use public phones) to use during a massive system failure, I think we can consult with the communications ministry and get the go-ahead,” he said.

Shibutani said he realized that emergency-use public phones could prove effective in times of telecommunications failure, adding that he felt the costs for providing such a service should be borne by the business operator and other parties responsible for the glitch.

He also noted that the scale of network failures tends to become larger when internet traffic is concentrated via the Tokyo metropolitan area or elsewhere.

“We can’t achieve our goal unless we create a decentralized digital infrastructure,” Shibutani said.