Late change in Abe’s schedule a rare chance for gunman 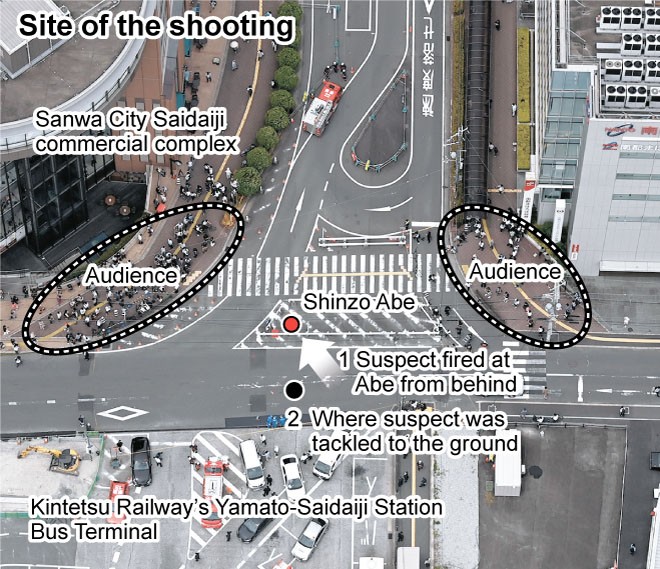 Abe traveled twice to Nara during the campaign for the July 10 Upper House election.

His first visit was on June 28 and his second was made July 8, when he was fatally shot from behind.

The city’s Yamato-Saidaiji Station formed the backdrop on both occasions when he gave speeches for a candidate from his Liberal Democratic Party.

But there were crucial differences on the days they were held, although the two sites were not far from each other.

On June 28, Abe stood before the south exit of the station with a campaign truck behind him, a setup that would have made it particularly difficult for a potential assailant to approach from behind.

For his second visit, LDP officials selected the north exit of the station just for a change.

However, the decision posed a formidable challenge for security personnel and proved fatal.

On July 8, Abe began to address the crowd from late morning in a 50-square-meter area surrounded by 80-centimer guardrails in an open T-shaped area with roads on all three sides and nothing to protect him, particularly his back, except for bodyguards.

A campaign truck could not be parked right behind him for security as LDP officials feared doing so would impede traffic on a busy, narrow road. As a result, bodyguards had to keep their eyes peeled in all directions, making their job even more exacting.

The suspect, 41-year-old Tetsuya Yamagami, approached Abe from behind after crossing a road, firing his first shot, which missed, from about 8 meters away and his second from about 5 meters.

Nara prefectural police were informed about Abe’s visit less than 24 hours before he arrived, giving them little time to be fully prepared.

“It was unusual that a visit by a VIP like him was set at such short notice,” said Yoshio Ogita, the secretary-general of the LDP’s Nara prefectural chapter. “Inadequate security arrangements have been blamed for the incident, but in truth there really was little time to prepare.”

On July 8, Abe, who still wielded enormous influence as the head of the LDP’s largest faction, was campaigning on behalf of Kei Sato.

Sato’s campaign staff informed the Nara prefectural police through its security bureau about the site picked for Abe’s speech only late in the afternoon of July 7.

Police and campaign staff then went to examine the site to hurriedly craft security for the engagement.

The following morning, prefectural police chief Tomoaki Onizuka gave his approval to the plan. He said later he did not find any outright glitch in the planned arrangement.

Abe was initially supposed to visit Nagano on July 8.

But it was canceled because the Shukan Bunshun weekly magazine published a story the day before about allegations of adultery involving the LDP candidate for whom Abe had planned to make a campaign speech.

LDP officials decided the timing was not right to visit Nagano.

As Abe was supposed to give a speech in Kyoto in the afternoon of July 8, LDP officials squeezed in nearby Nara to reduce his traveling time.

An LDP member of the Nara prefectural assembly summed up Abe’s slaying as the tragic outcome of a number of chance events.

“Abe’s schedule and location were decided at the last minute, officials were forced to compile the security plan in haste and there was a brief moment when there was almost no traffic on the road (behind him),” the member said. “It gave the shooter the perfect chance.”

But other parties in the election had shunned the north exit site outside Yamato-Saidaiji Staiton, viewing it as a security risk.

For example, Ichiro Matsui, head of Nippon Ishin (Japan Innovation Party), and other party officials addressed crowds on a street about 150 meters to the north of the site where Abe stood.

They opted out of the location Abe used because they decided it would be difficult to flee if something came up and have a standby vehicle ready in case of an emergency.

Komeito, the junior partner in the ruling coalition, and the main opposition Constitutional Democratic Party of Japan also passed up that particular site during their respective campaigning.

They both cited the difficulty of parking a campaign truck close by.