Insurance firms asked to be nicer to families of accident victims 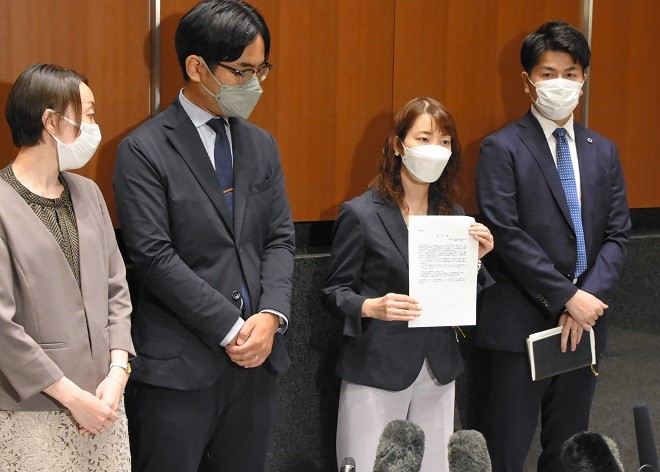 Juri Ozawa, second from right and head of Ai no Kai--a group of car accident victims’ family members in the Kanto region--responds to questions from reporters at the Financial Services Agency in Tokyo’s Chiyoda Ward on July 26. (Ryo Oyama)

The bereaved families of traffic accident victims are demanding insurance providers not inflict “secondary damage” on them by uttering inconsiderate comments at civil courts over compensation payments.

Ai no Kai, a group of car accident victims’ family members in the Kanto region around Tokyo, on July 26 submitted the request to the General Insurance Association of Japan and the Financial Services Agency.

Takuya Matsunaga, 35, deputy head of Ai no Kai, whose wife and daughter were killed in a traffic accident caused by an elderly former top bureaucrat in 2019 in Tokyo’s Ikebukuro district, said he underwent secondary damage during a trial for the high-profile tragedy.

“The insurance company’s words offended me in the civil trial, like they do to others,” he said. “We will be pursuing preventive measures with the government.”

The group is calling on the association and the agency supervising the insurance industry to provide thorough guidance about bringing an end to the rampant practice.

In its letter, Ai no Kai points out insurance companies offer “absurd arguments” and resort to “terrible words and actions that violate the dignity of bereaved families and others” in trials.

Concrete examples it cites include an insurance provider refusing to cover medical costs on the grounds that treatment was given despite the patient’s life being “unlikely to be saved.”

Another reportedly criticized a policyholder who was slow in filing a suit for “trying to receive delayed compensation.”

Ai no Kai notes these habits are causing “terrible pain” to victims.

With these circumstance in mind, Ai no Kai asked the Financial Services Agency to issue thorough instructions to insurance corporations for improvement. The GIAJ was urged to develop guidelines, and insurance firms were requested to recognize their corporate social responsibility.

Shunichi Suzuki, the state minister in charge of financial services, received its letter and told the victims’ group that the state had already pressed 25 insurance providers to work out guidelines, according to Ai no Kai’s accounts.