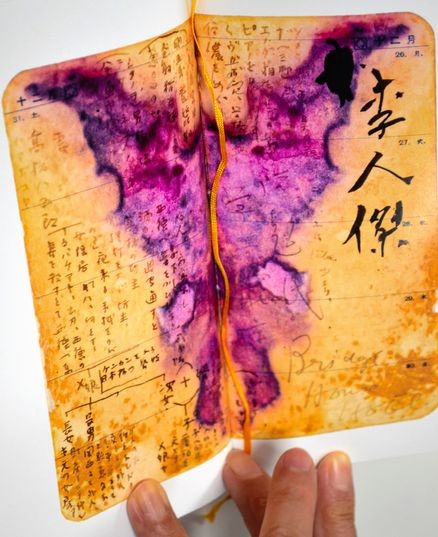 These facing pages of Ryunosuke Akutagawa’s “Notebook No. 6,” seen here at the Fujisawa city hall in Kanagawa Prefecture on July 19, contain blemishes, including an ink stain likely due to the use of water to douse a fire. Zhang Wei said she used image editing software and other tools to adjust the coloring and decipher the letters. The name of Li Renjie appears on the right page, written in black ink. (Tomoko Adachi)

The notebook had been preserved at the Fujisawa City Archives here and in an advanced state of deterioration. Book-format reproductions of the document were donated to the Fujisawa city government.

Akutagawa carried the notebook with him on an investigatory trip to China around a century ago as a newspaper correspondent during Japan’s Taisho Era (1912-1926).

The restoration uncovered hitherto unknown entries in the notebook, including the names of a Chinese politician and psychologist Sigmund Freud (1856-1939).

The restored document went on public display at the city archives from July 20.

“It has always been believed the notebook is a first-rate material that offers the writer’s viewpoint on Japan’s bearing on modern China,” said Osamu Nakamura, a curator with the Fujisawa City Archives. “It is a groundbreaking development that more details have come to light about the document.”

The content was restored by Zhang Wei, a 32-year-old graduate student of modern Japanese literature with the University of Tsukuba in Ibaraki Prefecture. Zhang, a native of the Chinese city of Hangzhou, lives in Kanazawa, the capital of Ishikawa Prefecture.

“Notebook No. 6,” as the autographic document is known, was used by Akutagawa during visits around China that started in spring 1921 when he was a correspondent for the Osaka Mainichi Shimbun newspaper.

The notebook, designated for use by employees of the newspaper company, measures 14 centimeters by 13 cm across and likely had 226 pages originally. What Akutagawa jotted down in the notebook provided materials for his later works, including the travelogue “Shina Yuki” (Travels in China).

The notebook deteriorated over time and partly because of a fire while it was kept by Yoshitoshi Kuzumaki (1909-1985), a literary critic and Akutagawa’s nephew.

A member of Kuzumaki’s family donated the notebook to the Fujisawa city government in 1996, whereupon officials microfilmed the document and put it in storage.

Zhang used image editing software and other tools to repair the microfilmed images and spent a year restoring them to their original state.

She also noticed that part of the material had been collated incorrectly when it was put into storage by the city government. Zhang published her research results, complete with her discussions on the topic, in article format in May.

The first available complete collection of Akutagawa’s works, which went to print shortly after the author’s death, already included part of the notebook’s content as transcribed by writer Tatsuo Hori (1904-1953).

Zhang said her restoration work uncovered entries that Hori had omitted, including the name, written in black ink, of Li Renjie and that of Freud. Li Renjie (1890-1927), aka Li Hanjun, was instrumental in the foundation of the Communist Party of China.

“What I found out is very interesting because it is believed that Akutagawa was influenced by Freud later, only in the final years of his life,” Zhang said. “I hope to study the subject further in the years to come.”