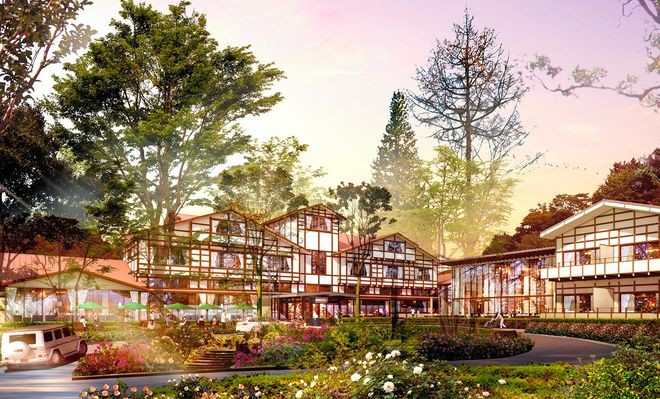 An artist’s rendition of the Mampei Hotel after the renovation work finishes in 2024 (Provided by Mori Trust Co.)

KARUIZAWA, Nagano Prefecture--The charming Mampei Hotel here, where John Lennon and his wife Yoko Ono used to stay to escape from the glare of fame, will close for business in January to undergo extensive renovations expected to last about one year and a half.

The work will be done to mark the hotel’s 130th anniversary.

The hotel, one of the oldest in this renowned summer highland retreat resort, will reopen in summer 2024, according to its operator, Tokyo-based Mori Trust Co.

Founded in 1894, the Mampei Hotel is said to be an early pioneer of Western-style lodgings in Japan.

Its main wooden building, called the Alps and which dates to 1936, is designated as a tangible cultural property by the government.

Mori Trust said the Alps building has deteriorated over the years and requires extensive reinforcement work and repairs.

Another building, a reinforced-concrete structure, will also be renovated to add guest rooms, a banquet hall and other facilities.