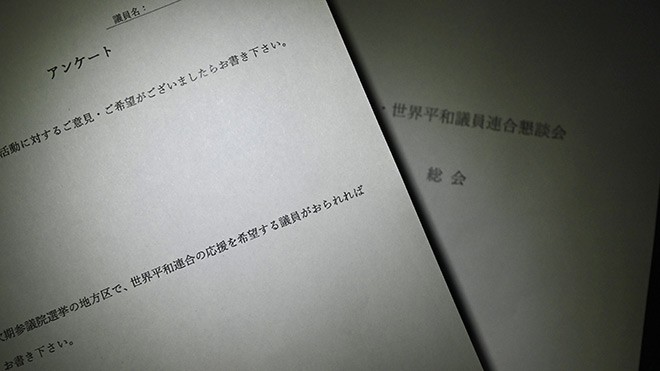 Less than a month before the Upper House election on July 10, a meeting attended by a packed room of Diet members and their aides with ulterior motives in mind was held in Tokyo's Nagatacho district.

Holding the meeting was an association of Diet members, mostly those who belong to the ruling Liberal Democratic Party. The association's name suggests its theme is "Japan and world peace."

But the group is believed to be connected to the Unification Church.

With a crucial election coming up, the church was viewed by some as offering a chance to secure more votes at the polls.

A person related to the association has joined it in anticipation of receiving extra votes from church members to add to the base support.

“It may be only several hundred votes in a single-seat constituency in the Lower House election,” the person said. “Still, I want them."

The meeting was held June 13 in the Lower House members' office building in Chiyoda Ward.

One attendee, an LDP lawmaker, said the consulting group has ties with the Unification Church, known formally as the Family Federation for World Peace and Unification.

In fact, a top official of Universal Peace Federation, a friendship organization of the church, was a speaker at the meeting.

The Unification Church has been in the news lately following the assassination of former Prime Minister Shinzo Abe on July 8 in Nara. The man suspected of shooting Abe held a strong resentment against the religious group as he blamed his mother's large donations to it for causing his family financial harm.

Now, the LDP lawmaker said, “I attended the meeting, thinking that the gathering was about international exchange. I was naive about it.”

A list of candidates for the association’s board members was distributed to the attendees at the meeting.

And the list featured the names of veteran LDP lawmakers, according to attendees.

Attendees were also asked to fill out a survey at the meeting.

“Please write down the names of politicians who want support from the Federation for World Peace in the next Upper House election’s prefectural constituency.”

The Federation for World Peace is another friendship organization of the church.

The association was established in June 2021.

Lawmakers and others who are members of the association said they joined because, “Having ties with the church has benefits for elections.”

A mid-ranking lawmaker who is related to the association said, “I have received help from members of the church’s friendship organizations, such as for making phone calls.”

Shigeharu Aoyama, an LDP Upper House member, wrote in his blog in mid-July about an incident that occurred when the party was conducting the endorsement process of candidates for the Upper House election.

Aoyama was told by a faction leader in the party, “Regarding lawmakers who cannot win only with votes from industry groups, we may allocate the Unification Church’s votes to them, if the church approves.”

The episode indicates a possibility that an LDP kingmaker distributed the votes of church members to candidates needing them.

An aide of an LDP lawmaker also said a person related to the church once offered, “May I share my votes with you?"

In return, the person asked the lawmaker to send a message to an event hosted by a friendship organization of the church.

The lawmaker strongly turned down the request, the aide said.

“I think the church is looking for a stamp of approval that it enjoys close ties with Diet members,” the aide said.

The Family Federation for World Peace and Unification told The Asahi Shimbun, “We, as a religious corporation, are not involved in political activities.”

It said the church is “not aware of” election cooperation and allocation of votes.