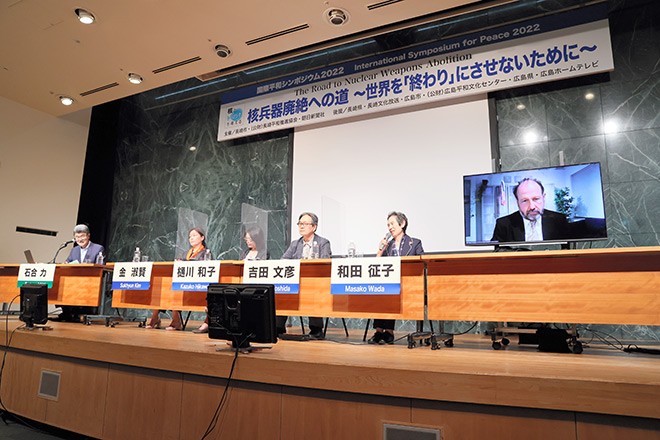 The panel discussion at The International Symposium for Peace, “The Road to Nuclear Weapons Abolition: To prevent the ‘end’ of the world,” with Daryl G. Kimball, the executive director of the U.S. think tank Arms Control Association, participating online (Jun Kaneko)

Russia’s invasion of Ukraine, along with the review conference of the Nuclear Nonproliferation Treaty, cast a large shadow over an international symposium held on July 30.

The International Symposium for Peace, “The Road to Nuclear Weapons Abolition: To prevent the ‘end’ of the world,” was held in Nagasaki and jointly sponsored by The Asahi Shimbun, the Nagasaki city government and the Nagasaki Foundation for the Promotion of Peace.

In his keynote address, Daryl G. Kimball, the executive director of the U.S. think tank Arms Control Association, said the NPT review conference that kicks off Aug. 1 at the U.N. headquarters in New York would be “pivotal” in determining whether issues surrounding arguments for and against nuclear weapons could be effectively addressed.

He said the review conference would be “a critical opportunity for the treaty’s 191 state-parties to reinforce the norms against nuclear weapons, to strongly condemn any threat of nuclear weapons use, and to intensify the pressure for action to fulfill the treaty’s Article VI disarmament provisions.”

Article VI obligates the five nuclear powers to make sincere efforts to reduce their respective nuclear arsenals, but progress on that front has been scant.

NO TALKS ON ARMS CONTROL

Kimball said a key issue that must be addressed at the NPT review conference was the absence of negotiations between the United States and Russia on a new arms control agreement due to animosity generated by the invasion of Ukraine.

“Normal channels of discussions have been broken” between the United States and Russia, Kimball said, and that could “lead to miscalculation” on the part of both sides.

He said nations at the NPT review conference should urge the United States and Russia to start negotiations toward a new agreement on nuclear weapons to replace the New Strategic Arms Reduction Treaty (START) that is set to expire in 2026.

Another topic that Kimball raised was the 2017 Treaty on the Prohibition of Nuclear Weapons (TPNW), which he described as one of the few positive developments in arms control in recent years.

“It is important that all states recognize that the TPNW is a positive contribution to global security and seriously consider joining the treaty,” he said. “If Japan wants to be an effective ‘bridge-builder’ between nuclear-armed states and nonnuclear weapon states, it will need to engage in upcoming meetings of the TPNW.”

The first meeting of signatory nations of TPNW was held in June, but Japan did not take part, even as an observer, because it relies on the U.S. nuclear umbrella for its defense.

A more pessimistic view about what Japan would likely do at the NPT review conference was presented by Masako Wada, an assistant secretary-general at the Japan Confederation of A- and H-Bomb Sufferers Organizations (Nihon Hidankyo).

She described various meetings nongovernmental organizations held with Foreign Ministry officials aimed at pressing the government to adopt a new approach at the NPT review conference.

Wada said she felt a wide gap exists in respect to aspirations held by Nihon Hidankyo and other NGOs and the Foreign Ministry. She said Foreign Ministry officials only offered very pessimistic views of the government’s likely stand at the review conference.

A national network of nongovernmental organizations submitted five proposals for Tokyo to focus on at the review conference, including a clear admission about the significance of the TPNW. But Wada said the Foreign Ministry showed little enthusiasm for any of them. Wada plans to attend the review conference as an NGO member.

Another member of the panel discussion, Kazuko Hikawa, a professor at Osaka Jogakuin University who studies nuclear disarmament issues, said she doubts whether the TPNW is the right approach toward the goal of eliminating nuclear weapons.

A former Foreign Ministry official, Hikawa is now involved in a project among NGOs to come up with a conceptual framework for sustainable peace and prosperity as part of the global movement to eliminate nuclear weapons.

Calling the TPNW a “young treaty,” Wada said she felt it was important for everyone to work toward further finetuning it and one day making it an effective treaty.

Another topic raised in the panel discussion was the possibility of nuclear sharing by Japan with its key ally the United States. The proposal was raised by some politicians soon after Russia invaded Ukraine in February.

Nuclear sharing is not a realistic possibility, according to Fumihiko Yoshida, director of the Research Center for Nuclear Weapons Abolition (RECNA) at Nagasaki University. He cited a number of reasons for it never getting off the ground, including the likelihood U.S. military authorities never allowing other nations to have control of the nuclear button. He added that moving toward nuclear sharing would only further push the NPT regime into a smaller corner by nations that are supposed to be supporting the treaty.

Kim Suk-hyun, a senior research fellow at South Korea’s Institute for National Security Strategy, said there was great interest in South Korea when Japanese politicians raised the possibility of nuclear sharing. She said this was due to local sensitivity toward any move by Tokyo to increase its military capabilities and lingering bitterness over the history of Japanese colonial domination of the Korean Peninsula.

Kimball also strongly opposed the notion of nuclear sharing by Japan and South Korea, saying it would be “very alarming in Washington and the international community and lead to dangerous reactions in Beijing and Pyongyang.”

He warned it would only lead to a dangerous arms race and “make Japan and South Korea less secure.”

Wada said rather than talking about nuclear sharing, Japan should place greater emphasis on working toward eliminating nuclear weapons altogether.

During the afternoon session, two members of the younger generation entered into a dialogue about ways of conveying the experiences of atomic bomb survivors as well as generating interest in the campaign to eliminate nuclear weapons.

Mitsuhiro Hayashida, a third-generation hibakusha and specially appointed researcher at RECNA, talked about a project he was involved in using photographs of Nagasaki before the city was leveled by an atomic bomb on Aug. 9, 1945, to allow younger generations to imagine the lives of the people of the city before it was devastated.

Asako Tsuji, a creative director who heads her own consulting firm in Tokyo to resolve social issues, said it was her first visit to Nagasaki as an adult and was struck by a model of the Fat Man at the Nagasaki Atomic Bomb Museum.

Tsuji said she was surprised at the sheer size of the atomic bomb dropped on Nagasaki and wondered why such a large weapon had to be used, noting that human beings are so fragile they can die at the hands of someone with a knife.

Tsuji also explained that she studied abroad during her junior and senior high school years and from that experience felt people overseas seem to assume that anyone from Japan has direct knowledge of the atomic bombings.

She explained that in Japan only residents of Hiroshima and Nagasaki were considered as being directly linked to the atomic bombings, but that to a global audience all Japanese were representatives of the only nation to have experienced atomic warfare.

“I thought it would be better to hold more dialogue with young people abroad,” Tsuji said.

To generate greater interest in eliminating nuclear weapons, she suggested showing a simulation of what could happen in Tokyo today if a nuclear weapon was dropped on the capital, noting that nuclear weapons are now much more powerful than the atomic bombs dropped on Hiroshima and Nagasaki 77 years ago.

Tsuji said young people of today have the luxury of social media, which gives them an opportunity to leave a record of what they feel about various issues and spread their views to a wider audience.

Hayashida said he came to realize it might be more important to consider how to work together to resolve issues rather than focus only on how to pass on information about the past in a one-directional way.