Kishida to announce fund to bring visitors to A-bombed cities 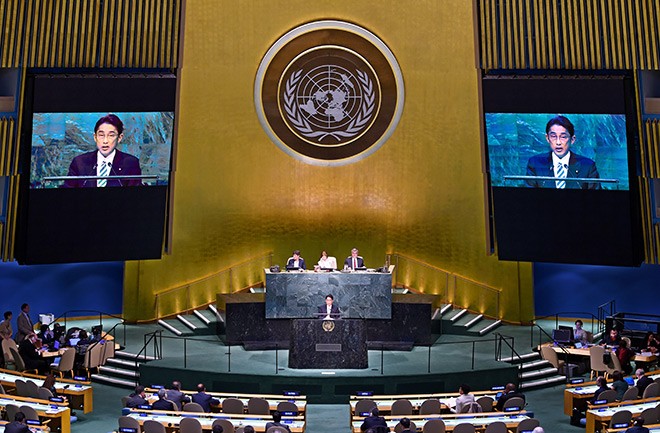 Prime Minister Fumio Kishida is set to announce the creation of a special fund to raise global awareness of the 1945 atomic bombings of Hiroshima and Nagasaki when he addresses the Nuclear Nonproliferation Treaty review conference in New York on Aug. 1.

The fund is expected to be used to bring people overseas to the two cities to help them learn more about the horrors of nuclear warfare and its aftermath.

“There are many things that will sink in only after actually visiting the atomic-bombed cities,” Kishida, who represents a constituency in Hiroshima, has often said of the significance of touring the memorial museums of the two cities.

During his speech at the U.N. headquarters, Kishida is expected to call on the assembled members to travel to Hiroshima and Nagasaki to see the situation for themselves.

He will be the first Japanese prime minister to address an NPT review conference.

Kishida had insisted on attending the meeting, saying it offers an unparalleled opportunity to talk to the nuclear powers about disarmament, noting that it is the only venue where both nuclear and nonnuclear powers come to the negotiating table.

Japan is also preparing to invite world leaders to Hiroshima in late November when it hosts an international conference of eminent persons to discuss living in a world without nuclear weapons.