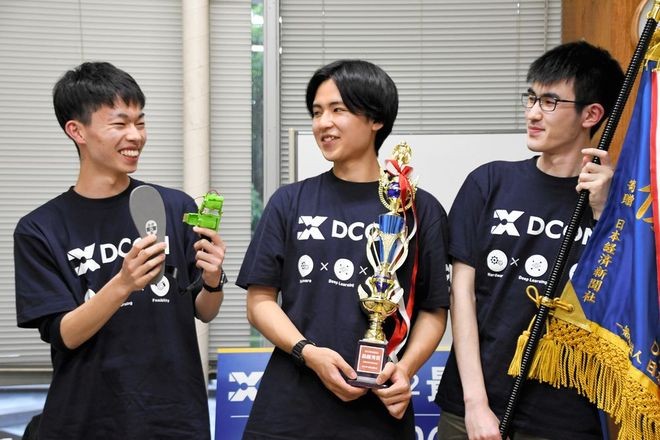 MORIOKA--Three students from a technical college in Iwate Prefecture have developed a device that assesses a person’s risk of dementia based on the way the wearer walks.

The students earned the top prize at a national entrepreneurship contest for their device by fetching a record venture valuation of 1 billion yen ($7.5 million).

They are first-year students at the National Institute of Technology Ichinoseki College, in Ichinoseki in the prefecture, studying in the college’s advanced course in “systems engineering for future innovation.”

The three are Sena Ishii, 21, who is studying ecological engineering, and Yuta Kikuchi, 21, and Taiki Sato, 20, both of whom are studying deep learning.

“Winning the top prize was quite gratifying; we earned it by having each of us exhibit our own strengths in a well-balanced manner,” Kikuchi said.

The competition called on entrants to develop and present devices that draw on the technology of deep learning, or autonomous learning by an artificial intelligence system.

The entries were evaluated from the standpoints of the technological caliber and business model designs, and they were rated according to the value they fetched.

About 50 teams took part in the contest held in Tokyo in late April.

“I have come to realize that outstanding technologies can end up as only self-contentment unless it is then utilized in society,” Sato said. “I want to pursue technologies that help people.”

The trio proposed a “D-walk” system, comprising devices and services intended to detect signs of dementia early on.

The students set their sights on the shuffling and unsteady gait that characterizes dementia patients.

When a test subject walks in a shoe planted with an insole-type foot-pressure sensor, the D-walk system evaluates the subject’s likelihood of developing dementia on the basis of acceleration and other measurements by referring to data collected from about 100 elderly citizens in Ichinoseki.

They also devised, under the coaching of an outside entrepreneur, a business model wherein the devices can be sold to insurance companies instead of being sold to individual users or to nursing care facilities.

They believe such an arrangement would benefit both insurance policyholders, who don’t want to develop dementia, and insurance companies, which have to pay benefits to policyholders diagnosed with dementia.

The team came out victorious at the contest by winning the business valuation of 1 billion yen and a potential investment of 500 million yen. They received high marks partly because the very practice of walking helps prevent dementia and partly because their setup allows for easy testing. Their business model is also realistic.

“The value we got was beyond anything we could’ve imagined, which made me realize the gravity of the high marks we were given,” Ishii said. “I hope to set a trend, from here in Iwate Prefecture, for starting a venture while being a student.”

The trio plans to set up a venture on the grounds of the college by the end of this year using the seed money of 1 million yen they were awarded as a supplementary prize.

They said they hope to make their product available to elderly people in their close communities soon, given that the number of dementia patients continues to rise.