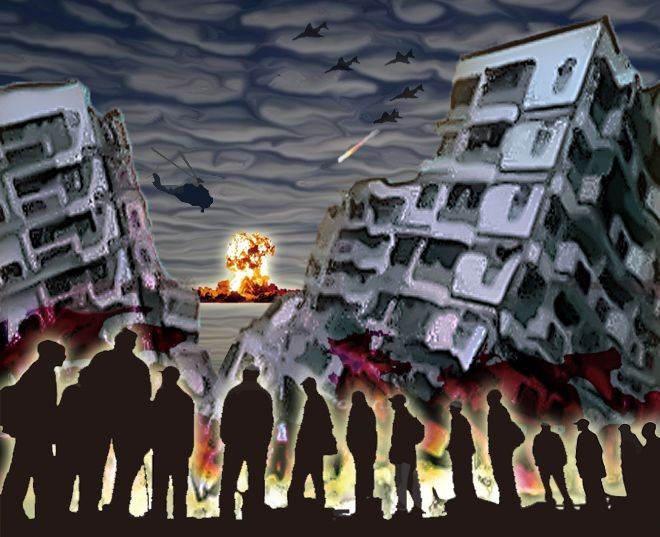 in the midst of war a raptor’s lone call
--Eva Limbach (Saarbrucken, Germany)

a lost ant
hunting for a way out
of the sugar mound
--Daya Bhat (Bangalore, India)

another madman
shifting the lines on a map
to his liking
--Mike Gallagher (Ballyduff, Ireland)

The haikuist described a literally and figuratively true event. Pablo Picasso’s (1881-1973) painting protested aerial bombing of the titular civilian town in the Spanish Civil War. First seen during a brief world tour in 1939, the powerful anti-war artwork came to the author’s mind again when his mom’s hometown of New York City was attacked on Sept. 11, 2001.

Elancharan Gunasekaran folded paper prayers in memory of Aug. 6, 1945, when the world’s first atomic bomb was dropped. Lorelyn De la Cruz Arevalo spent her day in Bombon, Philippines, praying that she would never see a cloud of dust and debris formed by a nuclear explosion.

Satoru Kanematsu’s hometown of Okazaki, Aichi Prefecture, was bombed in 1945. When he watched fireworks this summer, he was reminded that similar horrors must be taking place in the distant west. Masumi Orihara compared people who hide their anger to unexploded bombs which could suddenly blow up.

Fireworks flash--
fear of the air raid
as a boy

No Gun Violence!
a cumulonimbus cloud
raises its fist

Ricky Kesner made it through a night in Tokyo.

Nani Mariani wrote this line of relief in Melbourne: again the dawn is warm and she’s still there.

distant explosions--
trying to hide her concern
the war reporter

Angela Giordano might have made a wish while singing a nursery rhyme, “Ladybird, ladybird fly away home!”

refugee camp--
over the barbed wire
the cocciella

Mirela Brailean’s third line alluded to the death of a child and psychological trauma.

after the bombing
mom screaming among the ruins
a broken doll

Joanne van Helvoort revealed this “was my question when I was young” in the Netherlands.

upon the grave
flowers tossed
a mother’s sigh why?

Referring to the Canadian parliament buildings in Ottawa, Jessica Allyson wrote a Latin phrase on her third line that means, “who stands to gain?”

wars of words waged
beneath the Peace Tower...
cui bono?

It was so hot in Treviso, Italy, that Luciana Moretto uttered the religious desire to leave the earthly life to join Christ in heaven. Her third line is a Latin biblical phrase from Philippians 1:23-4 that literally means “I wish to be dissolved.”

the scent of wild jasmine
on your naked skin
midsummer night--

Again and again Yutaka Kitajima deadheaded flowers to keep them from going to seed in stifling hot Joetsu, Niigata Prefecture. Kanematsu watched funeral flowers lose their spiral in the rain.

Marigolds
bloom in relays for
fulfillment

Gardenias--
much too fragrant for
dear friend’s wake

Marie Derley composed this haiku in a “gassho-zukuri” house at the World Cultural Heritage site in the village of Ainokura, Toyama Prefecture.

toads in heat
the rice fields reveal
only their cries

Luciana Moretto planned a road trip after she read the startling news that archaeologists unearthed a land tortoise buried with its egg by the volcanic eruption of Mount Vesuvius in 79 A.D.

Pippa Phillips figuratively got lost at a turn in St. Louis, Missouri.

roadside verge
branching off
into a daydream

war crimes
listening to the silence
of the trees

after all the bending
a green shoot
also, a slug

Kanematsu thundered “plastic waste pollution is a big problem!” His haiku warns that microplastics in the sea are putting hundreds of species at risk of becoming extinct.

Horst Ludwig, whose mother once helped him “run from the approaching Soviet army… so we still could get further west” rolled his wheelchair to a sunny spot on the Pacific Ocean and watched a container ship rise from beyond the horizon.

All great heroes
in life-threatening fights long for
nothing going on...

Anna Goluba has found a way to maintain her spiritual balance in Warsaw, Poland.

War, first time so close…
I memorize
Another poem

Sweeney prepared for the return of spirits and souls of loved ones when festivals commemorating dead ancestors are held from Aug. 13 to 15.

summer wind
a dove feather
on a paper boat

Margaret Coats shared her most recent haiku from California. An avid poet, she is currently judging an online competition for the Society of Classical Poets, which gloriously promotes rhyming, rhythmic and rapturous verse. She fondly recalls spending “four and a half beautiful years in Kyoto.”

The next issues of the Asahi Haikuist Network appear on Sept. 2, 16, and 30. Readers are invited to send haiku related to oil, oceans, or Oceania, on a postcard to David McMurray at the International University of Kagoshima, Sakanoue 8-34-1, Kagoshima, 891-0197, Japan, or by e-mail to (mcmurray@fka.att.ne.jp).