TASTE OF LIFE/ White fish and cherry tomatoes steamed in the microwave: Dishes wrapped, frozen and sent to aid elderly parents, others 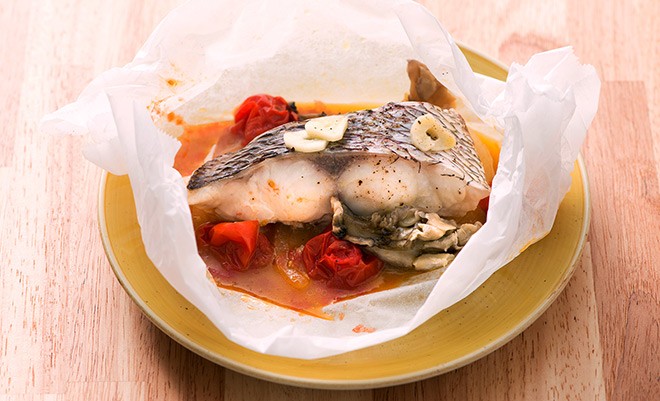 About seven years ago or so, Junko Ueda’s mother-in-law, who lives in Shimane Prefecture, suddenly fell ill.

Although things did not become serious, she had to remain in the hospital for some time and the meals of Ueda’s father-in-law who was to live on his own became a concern.

Her father-in-law, who was in his late 80s, could cook rice and make simple dishes such as miso soup, but he was not used to cooking regularly.

“I became worried about whether he was eating properly and getting the right nutrition. I racked my brain about what I could do,” says Ueda.

Going over there to cook was not a practical option. So she decided to cook dishes, wrap them in parchment paper, freeze them and send them through a package delivery service.

If cabbage rolls or macaroni gratin are wrapped and frozen, they can be enjoyed just by microwaving. To clean up, you only need to throw away the wrapper.

Ueda sent not only pre-cooked dishes such as cabbage rolls, but also uncooked meat and vegetables that were seasoned, wrapped and frozen. Since the receiver does the cooking by microwaving the dishes, the sender has less work to do.

This week’s “White fish and cherry tomatoes steamed in the microwave” is one such dish. Choose fish that is available such as sea bream (“tai”), Japanese Spanish mackerel (“sawara”) or cod (“tara”).

As introduced in the cooking method, they can also be heated right after being wrapped and eaten for dinner that day.

“The ingredients become steamed in the wrapper and the fish turns out fluffy,” says Ueda.

When she published a book based on her experiences of sending dishes to parents who live far away, she got unexpected reactions. It turned out that people wanted to send the frozen dishes to children living on their own or husbands who were on unaccompanied assignments.

Someone even wrote to her that, “When I prepared the dishes for myself, they became useful when I felt tired and was not up to cooking.”

“Although the recipes were created to solve the problem my family faced, it helps to know that there is such a way of cooking. I hope they are helpful to everyone,” says Ueda.

Junko Ueda is a cooking expert born in 1964 in Hyogo Prefecture. She is a graduate of the Tsuji Academy Technical College. After working at the school in addition as a staff member, she received further training in Europe. She has written books including “Chichi to haha eno gohan bin” (Meals delivered to fathers and mothers) published by Bunka Publishing Bureau.

2. Have 2 sheets of parchment paper measuring 30 cm by 35 cm ready. Place long side horizontally and place half the amount of each ingredient on one sheet. First spread onion, sprinkle a bit of salt, lay fish and garlic on top, then place tomatoes and maitake. Sprinkle bit of pepper and pour olive oil and white wine on top.

3. Bring long ends of paper together, fold them jointly about twice. Twist the open ends on right and left as if wrapping candy. Place on heat-proof plate and microwave each at 600W for about 3 minutes.

4. Serve on dinner table as is and enjoy

About 330 kcal and 1.4 grams salt per portion
(Nutrient calculation by the Nutrition Clinic of Kagawa Nutrition University)

When the dishes are to be frozen, place the uncooked, wrapped meal in Step 3 in a freezer bag. Push out air and freeze. Before eating, place it on a heat-proof dish in frozen state and microwave at 600W for 4 to 5 minutes.

This column, translated from The Asahi Shimbun’s Jinsei Reshipi (Life Recipe) column, will next appear on Aug. 25.