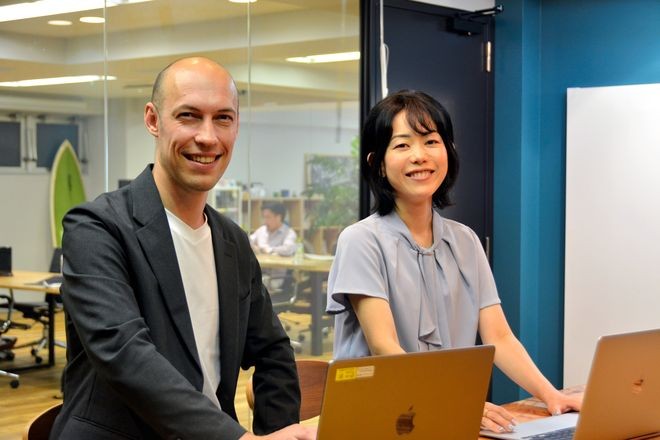 Konstantin Chvykov, left, who oversees recruiting Ukrainians at Japanese IT firm i3DESIGN Co., and his wife, Izumi, in an office in Tokyo's Shibuya Ward (Yasuyuki Onaya)

Some Japanese information technology companies are employing workers in Ukraine to support them as their nation grapples with the war against Russia.

The IT sector has been a driving force for economic growth in Ukraine, dubbed the “Silicon Valley of Eastern Europe” for its abundance of tech talent.

But it is feared that human resources will leave the country because of Russia’s invasion.

Konstantin Chvykov, 40, who hails from Ukraine, has been working since May at Tokyo-based IT company i3DESIGN Co., which supports companies with their digital transformation.

He oversees recruiting engineers in Ukraine.

Chvykov received applications from 50 people when he posted a job on a local job search website.

He decided to proceed with seven of them, he said.

Chvykov had been living in Kharkiv in northeastern Ukraine, where a fierce battle was fought between Ukrainian and Russian forces.

He was running a website design company with his Japanese wife, Izumi, 38.

Relying on the support of Izumi's parents, they came to Japan in late March and joined i3DESIGN.

By coincidence, he once worked for its local subsidiary in Kharkiv.

Most of its 15 locally hired staff members sought refuge in the western part of Ukraine or neighboring countries after the invasion.

They continue working remotely, however, making use of their strength as IT professionals who can work anywhere with internet access.

The recently recruited engineers can also work anywhere they desire.

"We want to support them not temporarily but on a continuing basis," said Yoichiro Shiba, president of i3DESIGN. "There are many talented resources in Ukraine, and they also bring positive effects for our growth."

The Ukrainian IT industry grew more than eightfold over 10 years, according to the Japan External Trade Organization (JETRO).

The nuclear and aerospace industries laid the groundwork when the country was part of the Soviet Union, with the ratio of tech personnel per population being higher than European countries.

Major companies such as U.S. IT giant Google have set up bases there.

Chvykov said the number of project orders from the United States and Europe has been declining, however.

There are also concerns that companies may pull out of Ukraine amid Russia's prolonged invasion.

"We can support them regardless of the distance," said President Daisaku Yoshimura.

Viacheslav Kolpakov, who operates the company commissioned by Next Age, said Japan is a new market for his company, which has been working with many European firms.

Tokyo-based PJ-T&C, whose operations include web designing and other tech work, has purchased software that Ukrainian engineers have developed.

In June, Yahoo Japan Corp., Line Corp. and five other IT firms jointly held an employment-assistance seminar for Ukrainian evacuees to accelerate momentum for support in the entire industry.

Chvykov said he hopes not only IT firms but also companies in other industries will do business with Ukrainians to support their livelihoods and to keep the economy going.

(This story was written by Yasuyuki Onaya and Takashi Yoshida.)