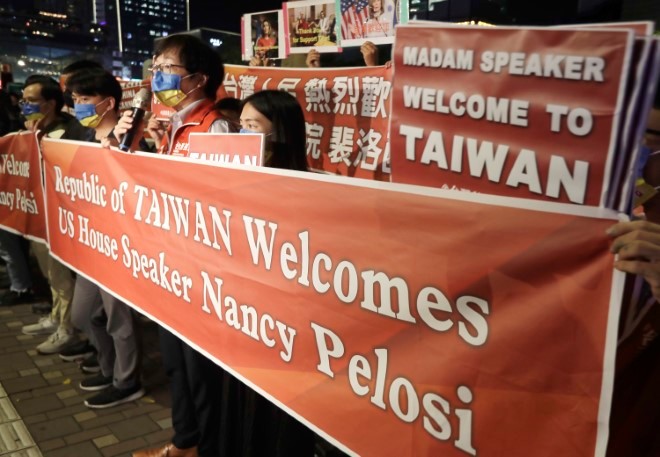 Supporters hold a banner outside the hotel where U.S. House Speaker Nancy Pelosi is supposed to be staying in Taipei, Taiwan, Aug 2, 2022. (AP Photo)

The website of Taiwan’s presidential office was targeted by a distributed denial of service (DDoS) attack on Tuesday and was at one point malfunctioning, the office said in a statement.

Access to the website was restored within about 20 minutes of the attack, the statement said. Taiwanese government agencies were monitoring the situation in the face of “information warfare,” a spokesperson later added.

A government portal website and Taiwan’s foreign ministry website were also taken offline and appeared inaccessible late on Tuesday. The foreign ministry did not immediately respond to a request for comment.

DDoS attacks work by directing high volumes of internet traffic towards targeted servers in a relatively unsophisticated bid to knock them offline.

“These are uncoordinated, random, moral-less attacks against websites that Chinese hacktivists use to get their message across,” said Johannes Ullrich, Dean of Research at the SANS Technology Institute, a cybersecurity education and research organization.

“Usually it continues for a few days, but they often lose interest within a week. Many of the attacks are motivated by what is written in the Chinese press,” Ullrich added.

A similar cohort of Chinese IP addresses had been scanning the internet for low level, easily exploitable vulnerabilities since Friday, he added, and did not match the usual activity carried out by Chinese government hackers