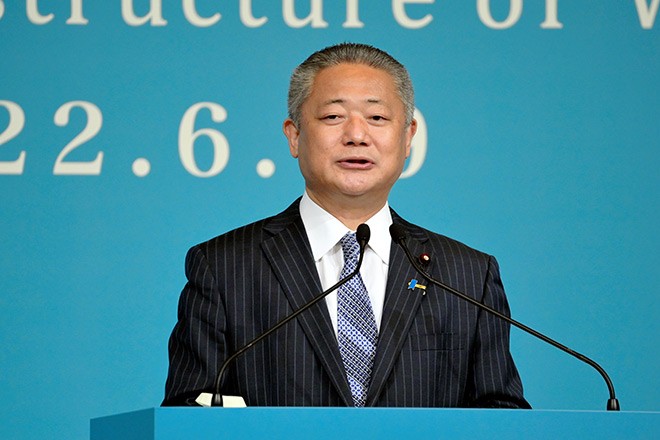 Nobuyuki Baba, the co-leader of Nippon Ishin, speaks at a launch event for the “Reiwa Council of People” in Tokyo’s Minato Ward on June 19, where political party leaders talked about their policies ahead of July 10 Upper House election. (Shinnosuke Ito)

Two opposition parties looking into the involvement of their members with the Unification Church or related groups said a total of 16 lawmakers had some connection, but not in the form of political donations or organized support in elections.

All the political parties are trying to gauge what support their members received from the church, formally called the Family Federation for World Peace and Unification, in the aftermath of the July 8 slaying of former Prime Minister Shinzo Abe.

The alleged gunman told police after his arrest that his life was ruined by his mother’s massive donations to the church, adding that he targeted Abe because he thought the veteran politician had ties to the church.

Nippon Ishin (Japan Innovation Party) and the main opposition Constitutional Democratic Party of Japan on Aug. 2 announced the results of surveys of members they undertook.

Nippon Ishin said 13 of its members had ties to the church, while the CDP found that three of its lawmakers had some connection.

Both parties were keen to emphasize that none of the lawmakers received political donations or organized support in elections.

Nippon Ishin co-leader Nobuyuki Baba and Fumitake Fujita, the party’s secretary-general, were among the 13 lawmakers to admit some connection with groups connected with the church.

Baba and Fujita and three other party lawmakers attended events hosted by the Women’s Federation for World Peace. Baba also gave an interview to Sekai Nippo, a news daily affiliated with the Unification Church.

Toyofumi Yoshida, a Lower House member, took part in an event held by the Federation for World Peace.

The Unification Church recognizes these organizations as friendship groups.

Six Lower House members and four from the Upper House said they visited or gave lectures to organizations that have ties to the church.

Ichiro Matsui, who heads Nippon Ishin and is also the mayor of Osaka, called for an in-house investigation on the issue as politicians’ links with the church are now in the public spotlight.

Senior officials got all 62 of the party’s lawmakers to submit reports on their involvement with groups connected with the Unification Church.

Osaka Ishin no Kai, a local political party, announced the same day that 16 of its 266 local assembly members or mayors had ties with the church.

Fifteen of the local asembly members in Osaka Prefecture attended meetings of the WFWP and one mayor sent a congratulatory message.

“The true nature of the problem is that politicians are viewed as billboards for organizations that find themselves under the critical gaze of the public. Both political parties and politicians should keep their distance from them,” Matsui said at an Aug. 2 news conference.

Fujita called for legislation that would set a cap on the amount of donations to religious organizations.

The CDP’s survey also required its members to come clean on any involvement with the church or related groups. Three lawmakers admitted some association with the church. They were Hirofumi Ryu, Toshikazu Morita and Kazuhiro Haraguchi, who are all Lower House members.

They either sent congratulatory messages to events hosted by the church or sent a secretary to meetings of groups connected with the church.

Chinami Nishimura, the party’s secretary-general, told a news conference that the latest findings brought to eight the total number of lawmakers in the party to disclose ties with the church. Five lawmakers had previously admitted to having a connection with the church.

“Clarifying their involvement will help to reveal how much damage was caused (by the church),” Nishimura said. “All political parties must work together on this issue.”

Defense Minister Nobuo Kishi, Abe’s younger brother, told a news conference the same day after a Cabinet meeting that he would review what electoral support he received.

“I think I need to review my relationships with (the church) as various social issues are coming to light,” he stated.