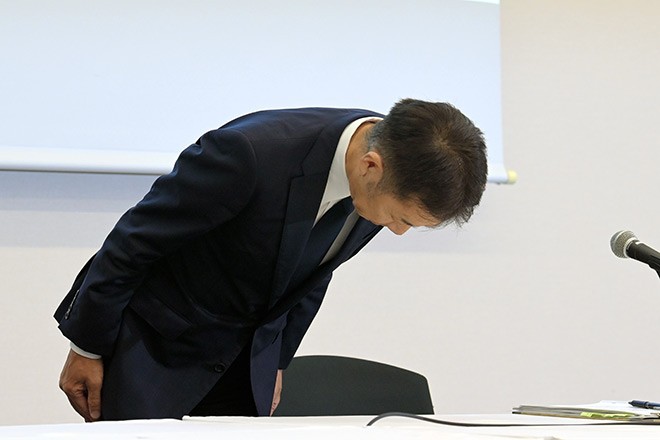 Satoshi Ogiso, president of Hino Motors Ltd., bows in apology for his company’s data fabrication scandal at a news conference in Tokyo on Aug. 2. (Kazushige Kobayashi)

An investigative panel has uncovered hundreds of thousands of more cases of forged engine data at Hino Motors Ltd., according to a report it released on Aug. 2.

The panel’s investigation into the company’s decades of faked inspections found that workers under pressure from their bosses to meet unrealistic expectations had gone too far, and also cast doubts about whether management was adequate at Toyota Motor Corp., its parent company.

“It is extremely regrettable, as the company betrayed the trust of all stakeholders,” Toyota President Akio Toyoda said of the Hino Motors scandal.

Hino Motors will stop delivering affected vehicles, except for part of small trucks, following the release of the report, which was submitted to the transport ministry the same day.

Transport ministry officials visited Hino Motors’ headquarters on the outskirts of Tokyo on Aug. 3 to launch an on-site inspection in the wake of the panel report.

The officials are on a fact-finding mission and will examine how the company is working on efforts to prevent such deceptive practices from occurring again.

That number could increase even further as the panel is still looking into vehicles that the company no longer manufactures.

According to the transport ministry, Hino Motors faked emissions data for 12 of 14 engine models that are still being made. Four of the models failed emissions standards.

The emissions-data tampering apparently began around in 2003, when regulations were strengthened.

The report said Hino Motors stopped endurance testing of emissions performance halfway through testing procedures and instead entered forged data, as if the tests had been carried out properly.

In some cases, tests were not conducted at all.

The report revealed that the workforce on the shop floor “went too far” to meet the demands of their superiors.

In fiscal 2006, the automobile acquisition tax was eased for vehicles that clear certain fuel economy standards.

At the time, workers scrambled to meet fuel-efficiency standards for some large engines at the behest of an engineering official at the company.

But there was a large gap between the goal and the actual performance, according to the report.

The leader of a team developing engines began fabricating fuel-economy data in April 2006, as the engineering official’s demands did not ease.

The panel said the entire episode shows how Hino Motors’ top management did not understand the abilities of its own employees, nor what resources were available at the company in terms of attaining the goal set by a top executive.

The panel, headed by Kazuo Sakakibara, a former prosecutor and a lawyer, said no evidence came up during the investigation that ranking officials were aware of any wrongdoing on the shop floor.

But it warned they should take the results of the investigation seriously.

As a leading maker of commercial vehicles, Hino Motors rolled out trucks, buses and construction machinery for decades.

It became a subsidiary of Toyota in 2001.

Most of its presidents had parachuted in from Toyota after it took over, including the current president, Satoshi Ogiso.

One of Hino Motors’ board members is Kenta Kon, executive vice president of Toyota.

Sakakibara said at a news conference on Aug. 2 that the panel did not recognize any instances that would suggest Toyota had direct influence on data fabrication.

Toyota is set to strengthen its tie-up with Hino Motors to help rebuild the company.