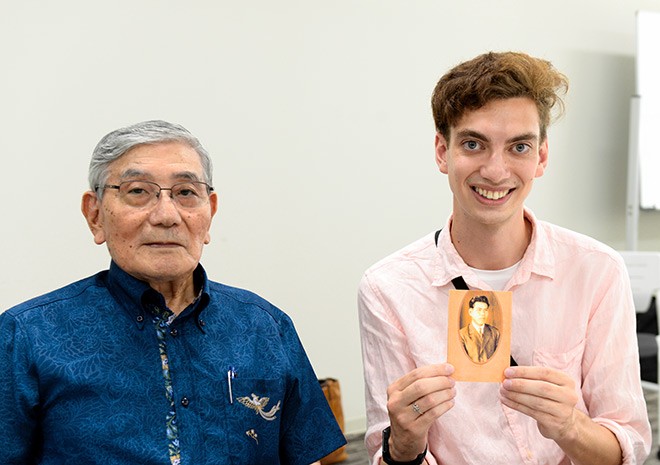 NAHA—U.S.-born Matthew Tamashiro Harris heard stories about his great-grandfather, who left Okinawa Prefecture for Cuba around a century ago, and vowed to track down his relatives one day.

Harris, 28, spent the past several years searching for clues, visiting Okinawa Prefecture and Cuba to trace his ancestral roots.

His strenuous efforts finally paid off this summer when he met a nephew of his great-grandfather here.

Harris, who currently lives in Ibaraki Prefecture, northeast of Tokyo, described the experience as “like a dream.”

Tokuzo Tamashiro, his great-grandfather on his mother’s side, was born in Sesokojima island in northern Okinawa Prefecture.

In 1925, he went to Cuba at age 26 as part of a group of emigrants sent by a company commissioned to carry out Japan’s emigration policies and became a farmer.

He was incarcerated in an internment camp after the war broke out between Japan and the United States in 1941.

Following the Cuban Revolution that brought Fidel Castro to power, Tamashiro moved to the United States in 1967. He died there in 1970.

Harris grew up listening to his mother talking about how Tamashiro used to play with her, his granddaughter.

Determined to find kin, Harris visited Sesokojima and Cuba in 2017.

Earlier this year, he sought advice from the Okinawa Prefectural Library in Naha. He perused documents on emigration from the early 20th century, along with prefectural history records and other materials.

In March, an Okinawan newspaper ran a story about his search for kin.

The prefectural library received a call from a woman from Sesokojima, who said she had located a relative of Tamashiro through acquaintances.

Harris met with Toshio Miyagi, 83, at the prefectural library on July 30.

Tamashiro was the younger brother of Miyagi’s mother, and Miyagi heard from his mother that her brother went to Cuba.

Harris and Miyagi spent a good part of the day going over the family tree and talking about their relatives and Sesokojima.

“A meeting like this wouldn’t have been possible if Harris-san hadn’t been tracing his roots,” said Miyagi, who lives in Naha. “I’m grateful.”

Harris said he was impressed by the kindness of the Okinawan people he met along the way.

Hiroaki Hara, who works at the resource section of the prefectural library, supported Harris in his quest.

“I want people to know that ‘Uchinanchu’ (Okinawan people) have spread around the world, with many people of Okinawan ancestry still living in other prefectures and other countries,” he said.

The 7th Worldwide Uchinanchu Festival will be held in Okinawa Prefecture from Oct. 31 to Nov. 3. Locals interact with emigrants who moved overseas and their offspring at the event, which is held every five years or so.