Fully restored ‘bonnet bus’ back in operation on weekends in Izu 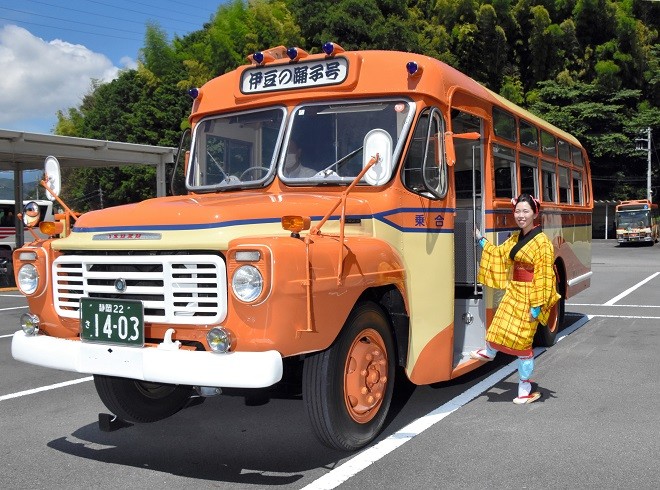 IZU, Shizuoka Prefecture--An old-style “bonnet bus” that was a common sight in the 1960s is now back in service after undergoing a major facelift to take sightseers to the Amagi mountainous region here.

The retro-looking Izu no Odoriko bus is named after Nobel laureate Yasunari Kawabata’s novel, “The Dancing Girl of Izu.”

Built in 1964, the vehicle is the symbolic face of Tokai Jidosha Co., which is the bus firm’s parent company based in Ito, also in Shizuoka Prefecture, and recently marked its 105th anniversary.

Tokai Jidosha spent six months starting in February to make major repairs to the interior and exterior, as well as repairing the brakes.

Painted in a two-tone color combination of orange and cream, the sightseeing attraction is popular because of its roundish shape.

The old-style signal indicators that flip out when the driver decides to make a left or right turn are also as good as new after rust was removed.

Passengers often remark on the pleasant smell of the oil-stained wood floor when they board the vehicle.

“It has become easier to open the windows, and it feels a little cooler thanks to the installation of fans,” said Reika Manabe, 22, a bus tour conductor decked out in kimono made from yellow-colored “kihachijo” silk fabric that is used by “odoriko” dancers.

The bus was previously used to take passengers over the Amagi-toge pass.

But the operator dropped that route so as not to tax the decades-old engine.

The bonnet bus is available for tours on weekends in August.

For more information, visit the official website at (https://www-tokaibus-jp.translate.goog/tour/bonnet_bus.html?_x_tr_sl=auto&_x_tr_tl=en&_x_tr_hl=ja).