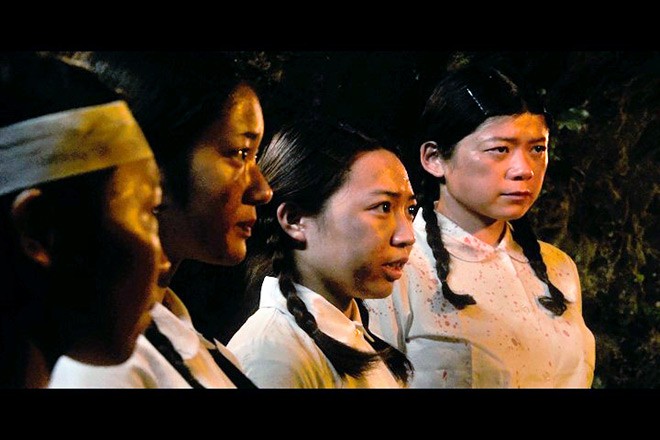 Two nonagenarians have brought a corps of female student nurses who toiled under harsh and cruel conditions during the 1945 Battle of Okinawa back to life through a new film.

Toyo Takemura and Kiku Nakayama, the only surviving members of the Shiraume student corps now available to speak about their experiences, feature in the film, which is part documentary and part dramatic re-enactment.

“Otome-tachi no Okinawa-Sen: Shiraume Gakuto no Kiroku” (Battle of Okinawa for young girls: records of the Shiraume student corps) is showing at theaters in Tokyo and elsewhere.

“I hope viewers will face up to the Battle of Okinawa through the prism of our movie and think about the realities of war,” said Takafumi Ota, 60, who directed the approximately 90-minute documentary portion containing interviews with Takemura and Nakayama.

The Shiraume student corps was assembled in March 1945 toward the end of World War II. It was composed of 56 fourth-year students at Okinawa Prefectural Second Girls’ High School in Naha.

The teenage girls were assigned to the Imperial Japanese Army’s 24th Division First Field Hospital at Mount Yaesedake in the southern part of Okinawa’s main island immediately after an 18-day nursing training.

Many of the soldiers carried into the underground hospital were untreatable and amputation was the only recourse for their injured limbs. Despite all that, the girls worked as nursing assistants with devotion to their duties.

U.S. troops soon landed on Okinawa’s main island. The student corps disbanded in June 1945 as Japanese troops were withdrawing to the south of the island.

The schoolgirls had to flee on their own, separately. Many of them were killed while under attack.

Takemura and Nakayama were eager to recount their experiences. They sat for interviews for one and a half hours each, while filming crew paid close attention to their health conditions.

In the interview, Takemura recalls the 18 days that she spent receiving nursing training.

She turns her thoughts to episodes that lend color to the otherwise exacting days, such as chatting with classmates after lights out and eating sugar brought from home with them.

Nakayama recalls how her grandson handed her a bouquet at his wedding, with words of thanks for her survival of the fierce battle.

“If Grandpa and Grandma hadn’t survived, I wouldn’t be here,” she quoted him as saying.

Nakayama, holding a photo showing her in the company of a large number of family members, says, “I realized how precious life is.”

Ota said: “I wanted viewers to have a realistic feel of the events of the time by watching what facial expressions, what gestures and what tones of the voice the survivors take on as they give accounts of their harsh and cruel experiences.”

Ota said he feels that Russia’s invasion of Ukraine has pulled global affairs again into another spell of turmoil.

“Just because Japan was the first to stage an attack on (the United States at) Pearl Harbor doesn’t, and shouldn’t, justify the tragedies of Okinawa, Hiroshima and Nagasaki,” he said.

“The Battle of Okinawa offers many clues for thinking about the realities of war,” Ota said. “I hope members of the generations with no experience of war will watch our film and talk about the topic.”