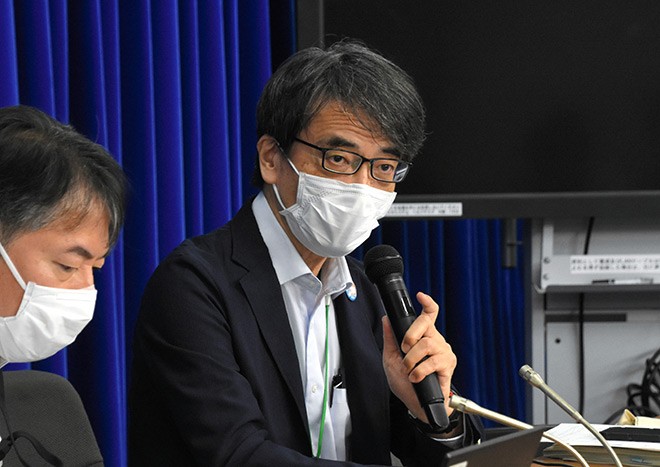 Takaji Wakita, head of the National Institute of Infectious Diseases who also heads the expert panel, speaks to reporters at a news conference after an expert panel meeting in the health ministry in Tokyo’s Kasumigaseki district on Aug. 3. (Kai Ichino)

Experts warn that severe COVID-19 cases and deaths are rising in Japan amid the seventh wave, though the pace of new infection cases is slowing.

“We have to keep an eye on the situation,” Takaji Wakita, head of the National Institute of Infectious Diseases, who also leads the expert panel advising the health ministry on how to combat the novel coronavirus, said at a news conference on Aug. 3.

However, deaths nearly doubled from the previous week.

“New cases could have peaked in some areas. Cases have also begun to decline in some areas, but it is increasing in most others,” Wakita said at the news conference following the meeting.

The numbers of severely ill patients and deaths tend to increase later than the surge in new cases.

The daily average of cases resulting in death for the week ending Aug. 2 was 110, or 1.9 times the average of the previous week of 58 deaths.

In the sixth wave, new cases peaked in early February, but cases resulting in death posted a record high of 327 about three weeks later, according to a tally compiled by The Asahi Shimbun.

“The seventh wave has the same trend as the sixth,” Wakita said. “Many elderly people in poor physical condition seem to have died after contracting the novel coronavirus.”

The occupancy rate of hospital beds is also rising.

The rate reached 50 percent or more in 29 prefectures, up from 18 prefectures the preceding week, according to the Cabinet Secretariat.

More than 70 percent of hospital beds were filled in the six prefectures of Kanagawa, Shizuoka, Wakayama, Fukuoka, Kagoshima and Okinawa.

The figure exceeded the previous record set on July 28 by more than 16,800.

Daily records were set in 24 prefectures on the day.

The number of deaths stood at 169 nationwide on that day.