LDP gets away with short Diet session; no time for big questions 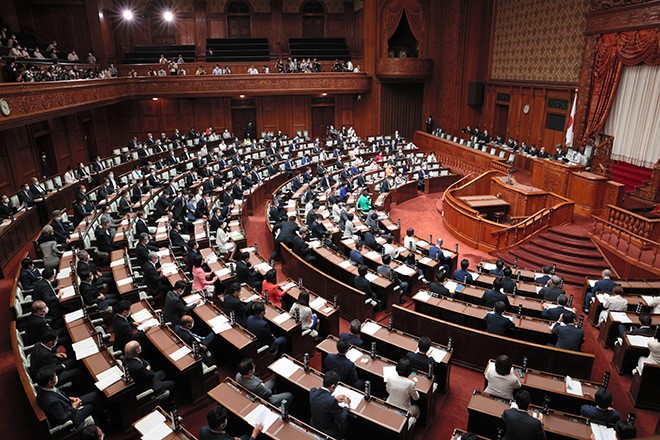 The Diet opens on Aug. 3 with an Upper House plenary session. (Takeshi Iwashita)

The extraordinary Diet session that began Aug. 3 will end on Aug. 5, leaving no time to address growing concerns about ties between politicians and the Unification Church or the current wave of the COVID-19 pandemic now sweeping Japan.

No plans are on the table to take up either issue, the former being one of huge public interest in the aftermath of the slaying last month of former Prime Minister Shinzo Abe and the latter because the government appears slow to take the initiative in getting a grip on this latest phase in the health crisis.

Common practice for an extraordinary Diet session held soon after an Upper House election, in this case July 10, mainly revolves around deciding on the chamber president and vice president.

Given that Abe was gunned down only two days before voting day and that the assailant held a grudge against the Unification Church, now formally known as Family Federation for World Peace and Unification, some attempt at delving into its relationship with politicians would seem apt right now.

The 41-year-old suspect said he targeted Abe because he thought the politician had ties to the church.

Former church members were left shaking their heads over the Diet’s apparent lack of eagerness to look into links between the church and politicians, with some saying it showed lawmakers were simply not interested in their problems.

A woman in her 40s living in Tokyo who joined the church as a teenager due to her mother’s influence, said, “I feel a gap in awareness between the general public and politicians.”

The woman said she was physically abused by the man she married in a mass wedding organized by the Unification Church and also suffered psychological scars because the church forbade divorce.

She said she is desperate to learn the extent of dealings between politicians and the church, adding that any inkling of a politician having cozied up to the church in search of votes would be too much for her to bear.

“I want the Diet to seriously discuss the relationship between the church and politicians,” the woman said as she griped about the lack of attention being given to the issue.

A woman in her 30s living in the Kansai region said she faced a difficult time growing up because her mother, who also was a member, donated around 100 million yen ($748,000) to the church. It meant she could not attend senior high school or university.

With no plans in the extraordinary Diet session to discuss issues related to the church, the woman said, “I wanted lawmakers to hear the voices of us ‘victims’ as well as to explain” their ties to the church.

Shigeru Minamino, a professor of constitutional law at Kyushu University, said a three-day session was simply too short to grapple with the many serious issues facing the nation.

“I feel that the representatives chosen in the election are not fulfilling their roles,” he said.

Minamino even suggested that politicians may naively feel that voters will forget about an issue if the Diet is not in session.

Toshimitsu Motegi, the secretary-general of the ruling Liberal Democratic Party, insists there were no organizational ties between the party and the Unification Church and said the onus was on individual lawmakers to explain their ties with the church and affiliated organizations.

An LDP lawmaker involved in the Diet Affairs Committee of the party admitted that consideration was not given to extending the extraordinary session.

Another LDP lawmaker said a lengthy session would have given the opposition the opportunity to attack the LDP from all sides regarding widely held suspicions about its ties to the Unification Church.

But the LDP is not solely to blame for the short session.

The directors of the Lower House Rules and Administration Committee from the Constitutional Democratic Party of Japan, Nippon Ishin (Japan Innovation Party) and the Democratic Party for the People all agreed at an Aug. 2 meeting to the three-day session.

The CDP and Nippon Ishin disclosed dealings their lawmakers had with the Unification Church, but the two largest opposition parties have other matters on their minds.

The CDP is still reeling from its disastrous performance in the election, with some calling for the heads of party executives to roll.