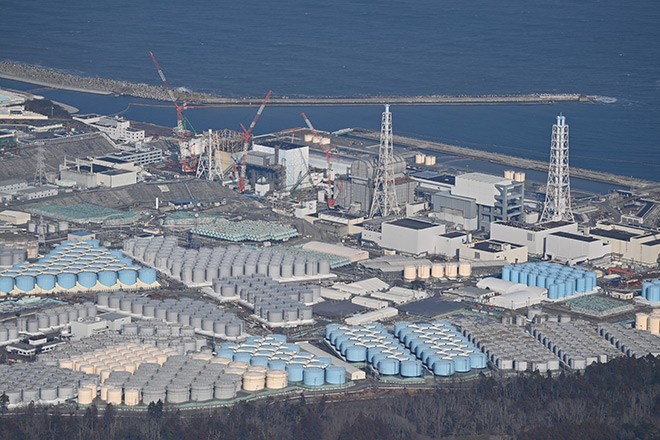 Tokyo Electric Power Co. started work Aug. 4 on construction of facilities to release treated radioactive water into the sea from its crippled Fukushima No. 1 nuclear plant in northeastern Japan.

TEPCO said Aug. 3 the work would begin Aug. 4, two days after gaining approval from Fukushima Governor Masao Uchibori and the mayors of Okuma and Futaba, which co-host the plant.

However, the utility has yet to win the consent of local residents about its plan to discharge tons of treated water offshore.

Local fishermen, concerned about the impact on their fish catches and livelihoods, are incensed by the plan.

“We think it is important to listen to concerns and opinions of the people of Fukushima and the public and continue explaining our stance and response as much as possible,” said Akira Ono, president of TEPCO’s Fukushima Daiichi Decontamination & Decommissioning Engineering Co.

TEPCO is dogged by a continuous accumulation of highly contaminated water at the coastal complex following a triple meltdown at the plant triggered by the 2011 earthquake and tsunami disaster.

The water is kept in storage tanks after most of the highly radioactive material has been treated with special equipment known as the Advanced Liquid Processing System (ALPS).

The government decided in April 2021 that the treated water had to be released into the sea as the facility is fast running out of space to set up more storage tanks, which already number in the hundreds.

A TEPCO official said the utility aims to complete work next spring to build a roughly 1-kilometer-long undersea tunnel and install pipes to transfer the treated water.

But the official added that the completion date could be pushed back to next summer if bad weather or other factors hamper progress, which would mean the discharge of the water will be delayed as well.

A reinforced concrete block will be installed at the discharge site by digging into the bedrock about 12 meters below the surface of the sea.

TEPCO will keep monitoring seawater daily during the offshore construction work and suspend the activity if it finds any abnormalities in the monitoring data.

Before releasing the treated water, the utility will mix it with seawater to dilute tritium, a radioactive isotope of hydrogen, which the ALPS cannot remove, to less than one-40th of the statutory standards for such a discharge.

TEPCO will also build a tank with capacity of 2,000 cubic meters to store treated water and measure the levels of tritium before releasing the contents into the sea. The utility plans to start constructing the tank in December at the earliest.