Gloves created to increase hand strength without any training 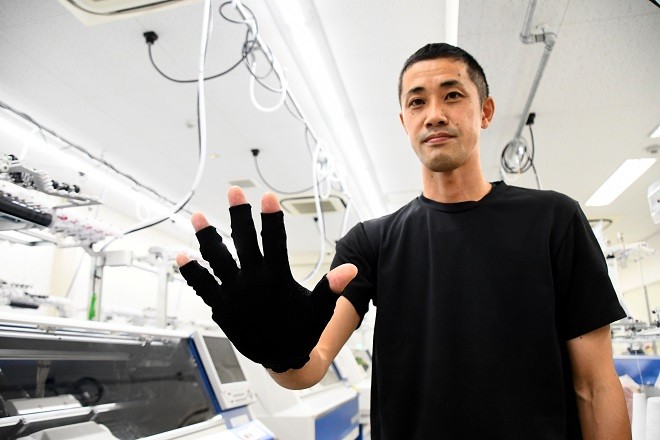 KATSURAGI, Nara Prefecture--Nara Medical University has teamed with socks maker and seller Mikasa Inc. to develop gloves designed for patients with Parkinson’s disease and athletes to strengthen the muscles of their fingers.

The handwear is woven in a way that its back side becomes smaller so that the wearer’s fingers are constantly pulled. Donning them will allow users to improve their manual functions unconsciously through daily-life motions.

A team of the university’s researchers had subjects suffering from Parkinson’s disease, marked by muscular rigidity and other conditions, wear the gloves as an experiment for five days. They were then compared with patients who did not wear the gloves.

Though no muscle improvement was reported for those not wearing the handwear, grip strength and other indicators increased among glove wearers. The wearers’ fingers’ ability to pinch objects apparently rose dramatically, in particular.

The longer the patients wore the gloves, the more their muscle strength increased, according to the scientists.

“We were looking to create something to heighten patients’ quality of life,” said Tomoo Mano, an associate professor of rehabilitation medicine at the university, who is part of the team.

Patients normally undergo rehabilitation programs, such as gripping balls and other kinds of training, to regain their hand functions. Such actions are different from those required in daily life.

Wearable training tools are mostly made of metal, so donning them usually makes patients feel uncomfortable, unlike with the gloves.

Based in Yokohama, Mikasa produced the brainchild in its works in Katsuragi. A specialized technology of Shima Seiki Mfg. Ltd. in Wakayama was adopted to make seamless gloves with a wholegarment flat knitting machine.

Mikasa is applying for permission to put the gloves on the market as a Category III medical equipment maker and retailer.

Upgrades are being added. Mikasa is holding discussions with a thread wholesaler to increase the handwear’s air permeability and other features.

“I am deeply impressed that the product I developed is proving helpful for people plagued by illness or injuries,” said Koichi Yamamoto, a Mikasa official involved in the gloves’ creation.