A flooded muddy river runs through Sekikawa village in Niigata Prefecture around 2 a.m. on Aug. 4. (Provided by a resident) 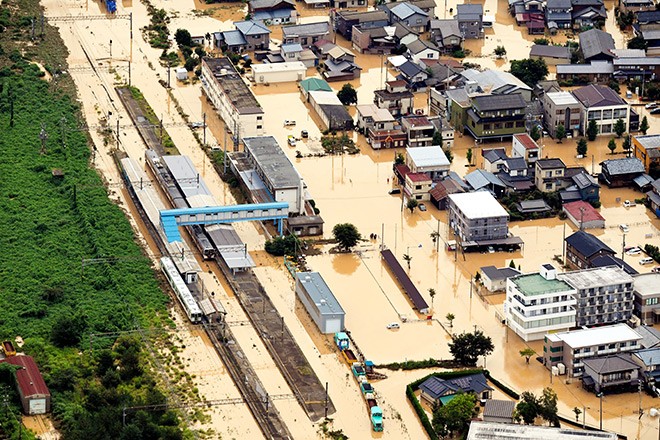 An area near JR Sakamachi Station in Murakami, Niigata Prefecture, is inundated on the morning of Aug. 4. (Ikuro Aiba)

Torrential rain in northeastern Japan from the evening of Aug. 3 caused widespread damage, with rivers overflowing and inundating roads and houses.

The Japan Meteorological Agency issued the highest rain alert for some areas in Niigata and Yamagata prefectures and urged residents to ensure their safety.

Damage was seen in these areas, along with neighboring Fukushima Prefecture, on Aug. 4.

Chief Cabinet Secretary Hirokazu Matsuno said two people were unaccounted for as of 9:30 a.m. on Aug. 4.

As of 6 a.m. on the day, the land ministry confirmed seven rivers were overflowing.

In Iide, Yamagata Prefecture, an approximately 40-meter-long railway bridge of the East Japan Railway Co. (JR East) Yonesaka Line over the Kojirakawa river was found to have collapsed on the morning of Aug. 4. The railroad tracks fell into the river.

In Yonezawa in the same prefecture, the river swelled, bent bridge piers and forced traffic to be halted.

In Kitakata, Fukushima Prefecture, a railway bridge for the JR Banetsusai Line had also fallen.

The platform at Sakamachi Station in Murakami, Niigata Prefecture, was flooded, according to the JR East Niigata branch.

Roads were cut off due to the flooding and villages were reported isolated.

In Murakami, one house caught up in a landslide completely collapsed, injuring one resident. A road leading to a community in the area was blocked by rocks and sand, leaving about 80 households isolated.

In Sekikawa in the same prefecture, 280 households were isolated due to landslides and flooded roads.