The “atomic-bombed violin,” once owned by a Russian, survived the atomic bombing of Hiroshima on Aug. 6, 1945. It was restored a decade ago and its sound has since touched many people’s hearts across borders. (The Asahi Shimbun) 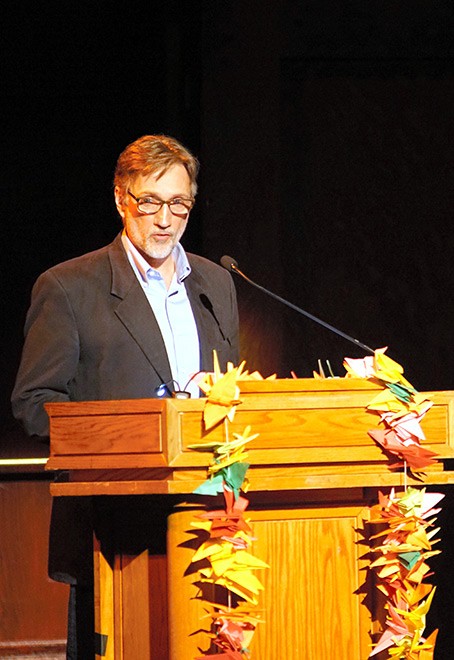 Clifton Truman Daniel, a grandson of former U.S. President Harry Truman, emcees a concert held in New York on May 2, 2015. A violin that survived the 1945 atomic bombing of Hiroshima was played at the event. (Photographed by Paule Saviano)

Editor’s note: This is the third installment in a five-part series on the “atomic-bombed violin.” The stringed instrument, once owned by a Russian, survived the atomic bombing of Hiroshima on Aug. 6, 1945. It was restored a decade ago and its sound has since touched many people’s hearts across borders.

It was a night to come together and reflect for the 600 people or so who packed a concert hall directly across from Central Park in Manhattan.

Masaaki Tanokura, principal concertmaster of the Osaka Philharmonic, made his way to the stage with an instrument known as the “atomic bombed violin.”

The instrument was pulled from the rubble of Hiroshima after the 1945 atomic bombing of the city. The bereaved family of the violin’s original owner, a Russian music teacher, donated it to the Hiroshima Jogakuin school in 1986.

The instrument was restored in 2012 and has since traveled the world to be played by many artists.

On May 2, 2015, the violin was one of the featured performances at an event titled, “With Love to Hiroshima and Nagasaki: A Concert for Disarmament.”

Emceeing the event was Clifton Truman Daniel, a grandson of Harry S. Truman, the 33rd U.S. president, who authorized the dropping of the atomic bombs on Hiroshima and Nagasaki.

Many hibakusha survivors of both bombings were in attendance, along with supporters and activists, to mark a review conference of the Parties to the Treaty on the Non-Proliferation of Nuclear Weapons (NPT), which was in progress at the U.N. headquarters in New York at the time.

Tanokura, now 45, served as concertmaster of the Hiroshima Symphony Orchestra until 2014 and had played the instrument before.

Every time he picked up the violin, he conjured up an image of the times when the atomic bombs were dropped on Hiroshima and Nagasaki, he said.

His thought process was the same on the New York stage.

The way he played, the melody and tempo changed from time to time, but the chord progression remained the same.

Tanokura said the message he wanted to convey through his performance was, “Whether it’s good or bad, human beings do the same thing. If we forget, we end up repeating our mistakes.”

When he finished playing, thunderous applause erupted and continued for at least 30 seconds.

“I think I let the violin voice all a violin can voice,” Tanokura recalled.

Himawari (Sunflower), a well-known hibakusha choir based in Nagasaki, was also a main feature of the concert.

The group performed “Never Again,” a song that the members perform at the annual Aug. 9 ceremony in their city to memorialize atomic bomb victims and pray for peace.

Yoshiko Hirahara, one of the choir’s 16 performers that night, said the group's mission is to “bring every single nameless person’s voice together to make a large circle and link it up for peace in the world.”

CHANGE OF HEART FOR TRUMAN'S GRANDSON

Daniel, a former newspaper reporter, was preoccupied with the proceedings of the event.

But the sounds of the violin and the voices of the hibakusha singers made him pause while performing his emcee duties.

Daniel said he first saw the Himawari choir performing in 2012 when he traveled to Nagasaki to attend the city's annual memorial ceremony and has been touched by the fact that the members are hibakusha.

But as Truman's grandson, he could have never envisioned traveling to Nagasaki, let alone serving as emcee at an anti-nuclear event.

Like most of his fellow Americans, Daniel had long believed what he was taught about the decision: That the U.S. invasion of Japan’s mainland was averted by the atomic bombing, which saved the lives of many Americans as well as Japanese.

But in 1999, his son, who was an elementary school student at the time, brought home a book from his school.

The book features a Japanese girl named Sadako. The heroine, whose real name is Sadako Sasaki, was exposed to the atomic bomb in Hiroshima when she was 2 years old and developed leukemia.

She spent days making paper cranes, praying for a recovery, but died in 1955 at the age of 12.

Daniel said in history classes in the United States, what happened to the population in Hiroshima and Nagasaki is rarely taught, and that it was the first time he learned about the human stories of the atomic-bombed cities through Sadako’s story.

After reading the book, he started learning more about the hibakusha.

In 2010, Daniel met Sadako’s older brother, Masahiro, who visited the United States. The two families remain in touch, he said.

WORKING TOGETHER TO ENSURE NO REPEAT

Until the day he died, Harry S. Truman maintained publicly that he had no regrets over the atomic bombings of Hiroshima and Nagasaki.

According to Daniel, however, when a White House photographer asked the president whether he regretted his decision, he replied, "Hell, yes!"

The president's letter to a U.S. senator who proposed dropping an atomic bomb on Tokyo is kept at the Harry S. Truman Library Museum in his native Missouri.

"I am not going to do it unless it is absolutely necessary," reads part of the letter, dated Aug. 9, 1945. "My object is to save as many American lives as possible but I also have a humane feeling for the women and children in Japan."

With the Russian invasion of Ukraine and Vladimir Putin’s threat of the possible use of nuclear weapons, Daniel said he has been reminded of the importance of the message from the hibakusha.

“For decades and decades, hibakusha have been telling their stories so that we all understand what that was like, and hope that we don’t do it again,” he said.

If a nuclear weapon is used today, Daniel said, “As horrible as it was in 1945, it would be much worse today. The weapons are bigger and more powerful.”

Asked what the United States can do to help realize a world without nuclear weapons, Daniel said, “I’m a private citizen, not an expert in foreign or domestic policy. If I had anything to give to this process, it was because I’m Harry Truman’s grandson, and because that was symbolic for me to go to Japan and to work with survivors.”

He said the path he has traveled shows the possibility that “You can not only get past the bombings, but you can work together to make sure that it doesn’t happen again.”

(This article was written by Shohei Okada and Masato Tainaka.)