SOUNDS OF HOPE: Violin resonates in the mind of son of Nagasaki A-bomb survivor

The “atomic-bombed violin,” once owned by a Russian, survived the atomic bombing of Hiroshima on Aug. 6, 1945. It was restored a decade ago and its sound has since touched many people’s hearts across borders. (The Asahi Shimbun) 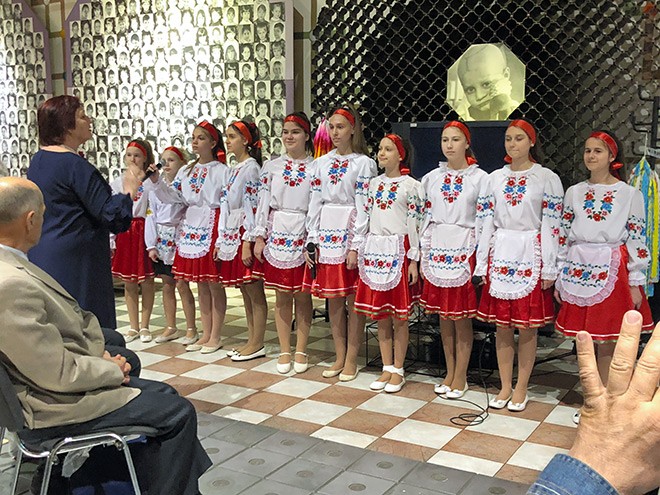 Members of the Kyiv Nightingales choir sing “The Bells of Nagasaki” at the Ukrainian National Chernobyl Museum in Kyiv on April 27, 2018. (Provided by Minoru Watanabe)

Editor’s note: This is the fourth installment in a five-part series on the “atomic-bombed violin.” The stringed instrument, once owned by a Russian, survived the atomic bombing of Hiroshima on Aug. 6, 1945. It was restored a decade ago and its sound has since touched many people’s hearts across borders.

Nagasaki resident Toyokazu Ihara sat in the front row at a performance in Kyiv and wiped tears from his eyes with his handkerchief as he listened to a choir of girls sing in Japanese.

Ten girls from the Kyiv Nightingales choir, clad in red and white traditional Ukrainian attire, performed “The Bells of Nagasaki,” a song that was popular in postwar Japan.

“Clear blue sky/ So painful that I feel sad about it,” they sang.

The year was 2018, when the hibakusha atomic bomb survivor, chair of a survivors' group called “Nagasaki ken Hibakusha Techo Tomo no Kai" (Association of the Hibakusha Notebook Holders in Nagasaki Prefecture), was visiting Ukraine and Belarus as part of a “trip for peace.”

Ihara also listened to the famed “atomic-bombed violin” at the same event as the choir performance held at the Ukrainian National Chernobyl Museum.

Illia Bondarenko, a 20-year-old Ukrainian violinist, played the violin that was pulled out of the rubble after the 1945 atomic bombing of Hiroshima and had miraculously survived.

It delivered a beautiful, haunting sound as Bondarenko performed with it for the second time, after playing it in Slavutych in northern Ukraine.

The conductor, Maria Moroz, 72, said the violin performance “conveyed the suffering and pain of those who survived the catastrophic damage (of the bombing).”

Ihara died the following year at 83.

“Being able to know Mr. Ihara was so precious,” Moroz said. “He spent his whole life calling for peace.”

The two countries share a history of nuclear disasters.

The performances were done in front of a wall of photographs of 864 children, all born between 1986, the year of the nuclear disaster at the Chernobyl Nuclear Power Plant, and 1989.

They were all forced to evacuate to faraway places as their parents worked to clean up radioactive contamination at the plant.

The choir started its relationship with Japan after it began getting involved in support activities concerning the nuclear plant accident.

But since Russia invaded Ukraine in February, the choir members have fled to elsewhere in the country or overseas.

Moroz hopes the war will end soon and that the choir members can one day reunite and sing together again.

Ihara’s 64-year-old son, Kazuhiro, said, “It’s so painful to think about where these girls could be now and what they might be doing.”

Kazuhiro has meanwhile taken up his father’s torch. He became committed to working for the association his father once led while listening to hibakusha’s experiences and meeting young people who were interested in nuclear disarmament.

Masao Tomonaga, 79, a hibakusha who succeeded Toyokazu as the chair of the association, abruptly said to Kazuhiro in April, “Are you going to Vienna?”

He was inviting Kazuhiro to attend the first meeting of state parties to the U.N. Treaty on the Prohibition of Nuclear Weapons scheduled for June in the Austrian city.

Kazuhiro was baffled by being invited, but he was also simply happy that he could attend.

He carried his late father’s bag on his trip to Austria. It was originally a gift from Kazuhiro and his two siblings for the trip to Ukraine four years prior.

In Vienna, Kazuhiro attended the meeting, as well as a forum organized by a nongovernmental organization, and reflected on the importance his father placed on advocating for disarmament.

As for the violin, he thinks it is not only a symbol but a strong link to the past.

“The violin communicates the feelings of people who made, used or heard it to people living several decades later,” Kazuhiro said.

And musical connections like that can last across vast distances and time.

On a monitor placed at the entrance of the Nagasaki ken Hibakusha Techo Tomo no Kai, a video of the choir singing “The Bells of Nagasaki” plays on repeat.

(This article was written by Shohei Okada, Mami Okada and Masato Tainaka.)