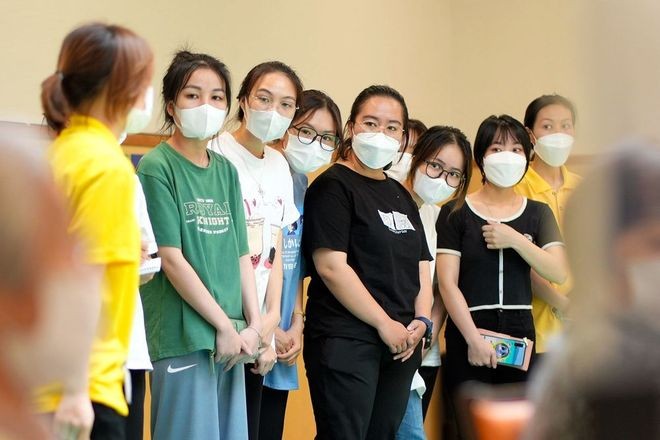 Technical intern trainees from Vietnam listen to explanations about their jobs at a special nursing-care home for the aged in Kimitsu, Chiba Prefecture, in May. (Asahi Shimbun file photo)

Justice Minister Yoshihisa Furukawa on July 29 vowed to revamp Japan’s technical intern training program, which has become an indispensable source of manpower to support the nation’s society and economy.

The controversial program should be swiftly reformed into a fair and just system through efforts based on a clear recognition of the vital role it plays.

While the government has claimed that the program is designed to promote international cooperation by helping workers from developing countries acquire job skills useful in their home countries, it has actually been used to secure low-cost labor to support Japanese industries facing manpower shortages.

The Asahi Shimbun’s editorials have repeatedly called for the abolition of the program, which has become a hotbed of human rights violations.

The government plans to set up a panel of experts to overhaul the program in autumn. The move has come far too late but the panel should accomplish its mission by interviewing interns and those who support them and developing useful proposals to reinvent the program through in-depth discussions.

Some 280,000 foreign nationals were staying in Japan as trainees under the program as of the end of last year. The number of foreigners working in Japan under this program is larger than that of any other group of foreign workers with a certain category of working visa.

But many trainees are struggling in an extremely insecure situation.

Most trainees are indebted when they come to Japan as they have paid hundreds of thousands of yen in fees to organizations in their countries that make the necessary arrangements for them, according to a survey by the Immigration Services Agency of Japan.

There is no dearth of unscrupulous brokers who demand exorbitant fees.

Since trainees are not allowed to switch jobs for three years, in principle, they are often forced to withstand dismal working conditions to continue working in Japan.

Violations of labor laws and regulations, including illegally long work hours, have been discovered at 70 percent of the businesses hiring trainees that have been subjected to the labor ministry’s supervision and administrative guidance.

As Furukawa pointed out, the reality of the program is divorced from its avowed purpose. This should not be allowed to continue any longer.

Partly because of a campaign by the United Nations, the international community has come to regard human rights abuses at workplaces as the problem of “business and human rights” that transcends national borders.

The Japanese government mapped out an action plan to tackle this problem two years ago. As for the intern trainee program, however, the government has only taken measures for partially improving the existing system.

Efforts to deal with the problems with the program should be focused, for now, on incorporating it into a “specified skill system” created in 2019, which allows foreign workers to switch jobs.

This transition requires careful explanations to trainees and cooperation from the businesses that employ them.

One vital viewpoint for discussions at the advisory panel that are to start in autumn is what should be done to ensure that Japan can continue attracting foreign workers.

If Japanese employers wrongly think they are in stronger positions than foreign workers as the suppliers of jobs, as some do, there can be no bright future for the nation.

Japan needs to treat foreign workers as equal members of society by guaranteeing them a wide range of rights, including the rights of permanent residents who are entitled to live with their families in Japan.

To build a society where foreigners can work with a sense of security, various social systems and the people’s mindset need to be changed accordingly.