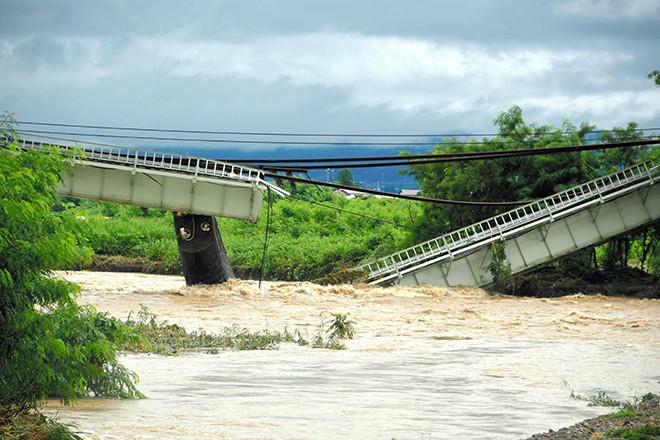 The Nishigorikawa railway bridge of the JR Banetsusai Line lies collapsed due to a swollen river in Kitakata, Fukushima Prefecture, on Aug. 4. (Toru Saito)

A rain front and a low-pressure system produced record rainfall across north and central Japan and caused widespread damage, with rivers overflowing and landslides reported.

Two people in Iwate and Yamagata prefectures were unaccounted for as of the evening of Aug. 4.

One is a 78-year-olf man from Ichinohe in Iwate Prefecture, who went outside to check conditions after the rain stopped on the evening of Aug. 3, prefectural officials said.

A resident in the town of Iide was missing as of 3 p.m. on Aug. 4, according to Yamagata Prefecture officials.

Yamagata and Niigata prefectures, along with neighboring areas, have been drenched by torrential rains since Aug. 3.

Heavy rain fell in Ishikawa Prefecture on Aug. 4 with the Kakehashigawa river in the southern prefecture flooding.

In Murakami, Niigata Prefecture, four houses were engulfed in landslides, injuring an 80-year-old resident, who broke his leg.

On Aug. 5, Shiga Prefecture and local weather officials said the Takatokigawa river breached its banks in the city of Nagahama at 9:05 a.m. They urged residents to ensure their own safety.

Up to 50 millimeters of rain fell in an hour in the area, the officials said.

The land ministry confirmed 45 rivers in nine prefectures were overflowing as of the morning of Aug. 5.

The Japan Meteorological Agency issued a heavy rain emergency warning for six cities and towns in Yamagata Prefecture, and two cities and one village in Niigata Prefecture by the morning of Aug. 4.

The JMA then switched it to a warning by noon.

The JMA also issued a notice on the morning of Aug. 5 for a record-breaking deluge over a short time for Fukui and Shiga prefectures, saying 80 mm or more of rain fell in one hour.