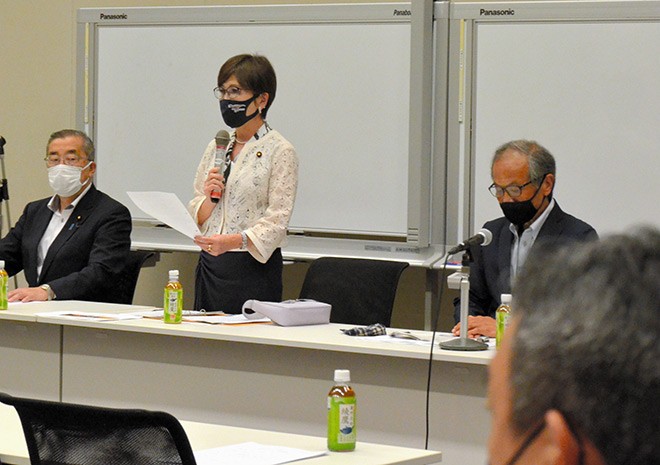 Pro-nuclear forces within the ruling Liberal Democratic Party and the government are starting to prepare for building next-generation nuclear reactors--something that for the past decade has been viewed as a political third rail.

Because of the harsh public criticism directed at nuclear energy in the wake of the 2011 triple meltdown at the Fukushima No. 1 nuclear power plant, government officials have mostly focused on restarting existing reactors.

And there has been little open debate about constructing new ones.

But the Russian invasion of Ukraine caused a spike in petroleum prices and concerns are now growing about an electricity shortage.

On top of all that, the global trend for decarbonization has provided fuel for nuclear energy proponents.

Politicians in the Diet who advocate for nuclear power have taken note of their newfound momentum.

“I want to pass on our views on replacing old reactors to the green-transformation council recently set up by the government,” Inada said.

The council, designed to examine ways to realize a carbon-neutral society, held its first meeting at the prime minister’s office on July 27.

Prime Minister Fumio Kishida asked the panel to clarify items where a government decision is required, including resuming operations at nuclear power plants and “any future developments.”

While Kishida never was clear about what he meant by future developments, the LDP group wants that to include the construction of replacement reactors.

The government is in the meantime working on a potential course for the construction of new nuclear reactors.

One recent proposal stands out. It was presented at a July 28 meeting of an expert panel tapped by the economy ministry, which oversees energy policy, for building next-generation reactors.

It also included projections suggesting these reactors could be put into operation as early as the 2030s.

But that appears to be a few steps ahead of where the Cabinet is on the matter.

At his Aug. 2 news conference, Koichi Hagiuda, the economy minister, said building advanced reactors is not being considered as a possibility for replacing old reactors.

But he did say the government wants to promote research and development of advanced reactors and foster the personnel needed to eventually operate them.

Hagiuda said the economy ministry’s proposal was presented to give a timeline for its research and development goals.

Government officials, though, are clearly using the recent changes in the international environment to push for more nuclear energy.

One source said any sort of green transformation will not be possible without relying on nuclear power.