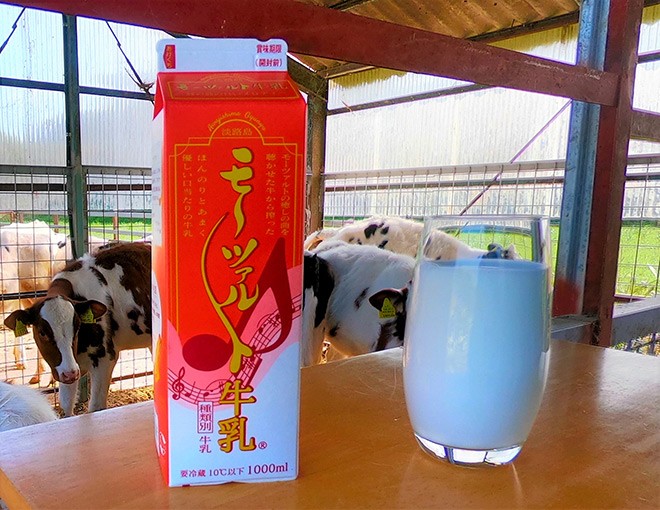 Awajishima Milk Co. said sales of its Mozart Milk, which is produced from dairy cows that listen to Mozart from 6:30 a.m. and 9 p.m. each day, have risen since the product’s release in April last year.

The company has sold 25,000 cartons, expanding its sales channels from Awajishima island, where it is based, into Osaka, Kobe and nearby areas on the main island of Honshu across the Akashi Strait.

The company president, Toshihiro Torii, is a big fan of classical music. When he played Mozart at his cowshed around 10 years ago, the animals, apparently more relaxed, became more docile and friendlier.

Feeling confident, Torii, 73, recommended that Green Farm, the dairy producer from which his company purchases raw milk, do the same. That was four years ago now.

The farm now plays “Eine kleine Nachtmusik” and other masterpieces by the 18th-century composer from speakers in a cowshed for about 150 dairy cows.

As a result, their milk contains higher levels of milkfat, which influences the richness, and nonfat milk solids, which contain calcium and vitamins, compared with other milk products, according to the company.

Previously, the company mixed it with batches produced by other dairy farmers. But it began offering the milk from Green Farm alone under the Mozart Milk brand in spring last year.

“It tastes sweet and rich and is also characterized by its refreshing aftertaste,” a company representative said.

“Because it is a very high quality milk, we hope those who are particular about taste and those who are health-conscious will enjoy it. Our next step is to expand sales channels nationwide.”