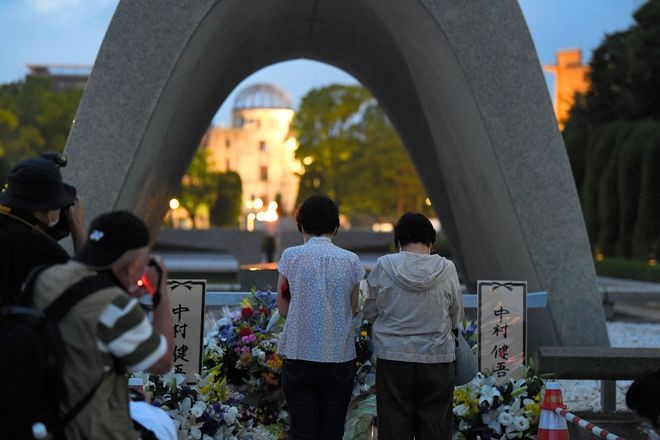 Mourners offer prayers before a cenotaph for atomic bomb victims in the Hiroshima Peace Memorial Park in the city’s Naka Ward early Aug. 6. (The Asahi Shimbun)

The error shall not be repeated, reads an epitaph in Hiroshima. This summer, as we mark the 77th anniversary of the atomic bombings of Hiroshima and Nagasaki, the world is facing an increased risk of the error being repeated.

This year, we have witnessed an unpardonable violation of the international order by a major nuclear power, Russia, which invaded neighboring Ukraine and threatened to use nuclear weapons.

We are facing “a time of nuclear danger not seen since the height of the Cold War,” U.N. Secretary-General Antonio Guterres warned recently. “Humanity is in danger of forgetting the lessons forged in the terrifying fires of Hiroshima and Nagasaki,” he said in a speech at the 10th Review Conference of the Parties to the Treaty on the Non-Proliferation of Nuclear Weapons.

Japan is not immune to forgetting the lessons. Some people in this country are talking about “nuclear sharing,” which means hosting U.S. nuclear weapons, without clearly understanding the realties of nuclear warfare. This policy would not just run counter to an international agreement on nuclear disarmament but could also raise the risk of nuclear weapons being used. This is a disturbing situation.

Since the end of World War II, the world has been upholding a norm born out of the nuclear devastation of Hiroshima Nagasaki in 1945. This norm applies not just to treaties and systems. It is a global consensus that nuclear weapons are so destructive and abhorrent that it would be “intrinsically wrong” to use them. This is an unwritten law that lies at the heart of the norms and institutions of nuclear restraint.

Citizens’ calls for a world without nuclear weapons, along with the role the United Nations has played in calls for nuclear disarmament and imagery of the destruction, have combined to foster a sense of taboo. This taboo has been shared as a line that must never be crossed. But the nuclear taboo is now “weakening,” Tannenwald warns.

Behind this disturbing trend is the reality that rules and frameworks for protecting peace and order have been seriously undermined. One case in point is the U.N. Security Council, which has become dysfunctional due to the domineering behavior of the major powers.

With the world plagued by a proliferation of politics that preaches the gospel of destroying norms, rather than protecting them, we wonder how many political leaders today are committed to applying the brakes of reason to the folly of destroying norms.

And the problem of oblivion. Referring to the current generation of politicians, most of whom were born after the end of World War II, “Hiroshima lies just outside their collective memory,” Daniel Immerwahr, an American historian, wrote in an opinion piece published in a British newspaper.

Both the United States and Russia are competing to develop smaller, “usable” nuclear arms. This new nuclear arms race indicates a failure to imagine how even a small nuclear weapon would cause a humanitarian catastrophe.

Russia’s war of aggression and threat of nuclear attacks should be seen as consequences of the weakened norms. All nuclear powers and countries dependent on the U.S. nuclear umbrella need to confront their responsibility for the situation.

This year, the world has also seen one historical step of hope taken. The first meeting of the countries that have ratified the Treaty on the Prohibition of Nuclear Weapons was held in Vienna.

In an online meeting that linked the Vienna conference with Hiroshima, Hiroe Kawashimo, 76, said she wanted to see a world without war. As she spoke in front of the Atomic Bomb Dome, a solemn silence descended over the attendants.

Kawashimo, like many children of her generation, was exposed to A-bomb radiation while still a fetus in her mother's womb. As a result, the children were born with abnormally small heads, a disorder known as “A-bomb microcephaly.” Many of these victims tend to remain silent about their disabilities due to fears of prejudice. Kawashimo decided to start talking publicly about her misfortune for the first time because of Russia’s invasion of Ukraine.

“Is the horror of nuclear arms, which inflict such agony on people even before they were born, really understood?” asks Naomasa Hirao, who heads the secretariat of “Kinokokai” (mushroom association), a group of A-bomb microcephaly sufferers and their families.

During the months from April, 136 cities of 13 countries joined Mayors for Peace, a Hiroshima-based international organization of cities dedicated to promoting the elimination of nuclear weapons. The unusual increase in the body’s membership was driven by a rush of European cities to get involved in the cause.

The mayor of the German city of Hanover, one of the vice president cities, said in written answers to questions from The Asahi Shimbun that mayors, in solidarity with Ukraine, are sending out clear signals calling for efforts toward nuclear disarmament and a legal ban on nuclear weapons.

A new war has led to a turning point that provides an incentive for a new call for nuclear disarmament. The question is how political leaders will respond to this call and translate it into specific policies.

While the nuclear ban treaty has become a new pillar of the norms, the Nuclear Non-Proliferation Treaty (NPT) has been underpinning the rules to prevent the spread of nuclear arms since the end of the Cold War. These two treaties are the wheels of the vehicle for the international drive for the elimination of nuclear weapons.

The Japanese government was not represented in the first meeting of the signatories to the nuclear ban treaty. That is because Prime Minister Fumio Kishida has turned his back on the treaty, just like his two predecessors, former Prime Ministers Yoshihide Suga and Shinzo Abe.

The NPT review conference that started Aug. 1 is still going on in New York. Kishida became the first Japanese leader to attend an NPT review conference and delivered a speech there. He took a positive first step when he promised to “promote the accurate understanding on the realities of nuclear weapons use.”

But two important elements were missing from his address. One was praise for the nuclear ban treaty. The other was Japan’s role as a “bridge” between the nuclear powers and non-nuclear countries.

Because the norms are in retreat, it was all the more important for the Japanese leader to send out to the world the strong message that the very existence of nuclear arms is wrong, instead of confining his efforts to “realistic policies.”

The average age of A-bomb survivors, or hibakusha, has surpassed 84. With time running out for learning directly from their memories, there are some notable undertakings of young people to spread anti-nuclear messages.

Many young Japanese took part in the nuclear ban conference.

Kako Okuno, a 20-year-old Hiroshima native, was inspired by Greta Thunberg, the Swedish environmental activist, to promote the notion that nuclear warfare would destroy the global climate. Okuno, like many others of her generation, has a keen interest in environmental issues. “There is a global company of people who share the same views and feelings,” she says.

We should support such young supporters of the norms who can easily transcend national borders and spread sympathy globally with the cause while maintaining solidarity among like-minded people.