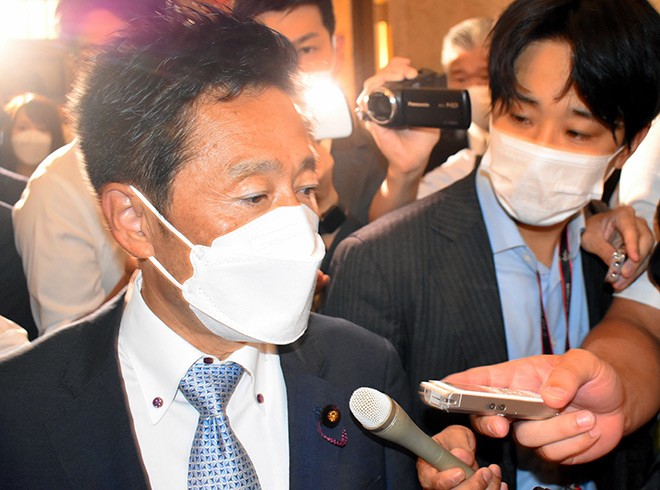 Yoshiyuki Inoue, left, who was elected in the July 10 Upper House election, answers questions from reporters in the Diet on Aug. 3. (Takashi Togo)

Three days ahead of the July 10 Upper House election, a Unification Church follower in eastern Japan received a text on her smartphone calling on her to vote for a candidate running from the ruling Liberal Democratic Party.

“I am praying for Yoshiyuki Inoue’s successful candidacy. He is needed in the political world,” read the text from an ardent follower of the religious group, now formally called the Family Federation for World Peace and Unification. “Inoue is fighting the Satan force.”

The 59-year-old Inoue, an aide to Shinzo Abe when he was prime minister, was running in the proportional representation segment of the election.

The woman, who is in her 40s, voted for Inoue without reservation. In fact, she has always cast her ballot for an LDP candidate in national elections just as her parents, who are also followers of the church, told her to do.

Since she was very young, the woman’s life has revolved around the church.

Her parents got hitched in one of the church’s renowned mass weddings. She grew up in an apartment building whose occupants were all followers. She and her family attended church every Sunday without fail.

The woman even traveled as a teenager to South Korea, where the religious group was founded, to take part in a session for novices.

Inoue ran unsuccessfully in the 2019 Upper House election, garnering about 88,000 votes. But this time around, he won 165,000 votes, landing him a Diet seat.

Church officials were confident of Inoue’s success even before votes were counted on July 10.

The official said the church’s role is to secure the election of a candidate who does not have a solid support base.

In the 2016 Upper House election, the church backed Yoshifumi Miyajima, an LDP candidate who won a Diet seat for the first time.

In the Upper House election three years later, the group rallied behind Tsuneo Kitamura, who was re-elected as an LDP member.

Miyajima, Kitamura and Inoue, all members of the Abe faction, ran in the proportional representation segment, where organized support plays a crucial factor compared with races in electoral districts.

Miyajima initially sought a second six-year term in this year’s Upper House election. He met with Abe repeatedly earlier this year to ask for his help.

“He pleaded for votes from the church, just as happened in the previous election,” according to a former aide to Miyajima.

But Abe, who took over the LDP’s largest faction after stepping down as prime minister in 2020, refused.

“It is not possible this time,” Abe was quoted as saying.

Another individual with inside knowledge of the matter said the Miyajima side was later informed by a church official that the entire group would back Inoue at the behest of Abe.

In the end, Mayajima pulled out of the July 10 race although his candidacy had been approved by the LDP earlier.

Two days before the election, Abe was fatally shot while giving a campaign speech for an LDP candidate in Nara. The suspected gunman, 41-year-old Tetsuya Yamagami, told investigators after his arrest that he shot Abe because he thought the veteran politician had ties to the Unification Church.

Yamagami made clear he bore deep resentment against the church, blaming it for his miserable childhood. His mother, a follower, plunged the family into financial difficulties by giving the church more than 100 million yen ($741,000) in donations, according to his relatives.

A woman in her 30s who lives in the Kansai region told The Asahi Shimbun that when she learned the Unification Church was the backdrop of the attack, it came as “no surprise.”

Her parents were also followers of the church.

By the time she was in her late teens, her parents had purchased a wide array of expensive items from the group at the say-so of senior members who told them they would “end up in hell” if they did not.

He parents told her they spent more than 100 million yen on the items.

The woman could not afford to go to college, given the perilous state of the family’s finances.

“I believe the suspect was in a situation similar to mine,” she said.

The woman said the church’s link with the LDP was common knowledge among followers.

“Followers were all aware of it,” she said. “We all shared a feeling that the activities of the group were endorsed by politicians and, therefore, could not be wrong.”

After Abe’s slaying, it emerged that a large number of LDP lawmakers had ties with the church.

In some cases, followers volunteered their time to help their election campaigns.

“We can field a candidate of our own (for national elections) anytime we choose,” a church official has told the Asahi. “But a single lawmaker could not get done much. It would be wiser for us to get the LDP to protect our organization in exchange for our broad support to the party.”

Inoue denied getting donations from the church. He also denied that church members assisted in his campaign.

Kitamura said that it is “practically impossible to know all the details” about the group’s involvement in terms of support to his election campaign and donations to his side.

Miyajima declined to give an interview to the Asahi. But his former aide admitted that an entity affiliated with the church provided unspecified assistance in his campaign.

The Unification Church denied “any involvement in political activities as a religious corporation.”