50-strong group of hikers rescued from bank of swollen river

Emergency rescuers come to the aid of a group of gorge climbers stranded in Higashi-Omi, Shiga Prefecture, on Aug. 6. (Footage from Asahi Television Broadcasting Corp.) 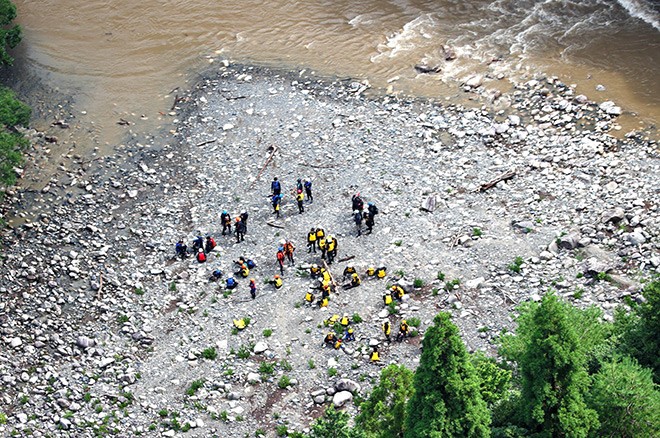 Members of a gorge climbing tour rescued along the Kanzakigawa river in Higashi-Omi, Shiga Prefecture, on Aug. 6 (Satoru Iizuka)

HIGASHI-OMI, Shiga Prefecture--Four dozen or so gorge climbers and their guide were rescued Aug. 6 after they got trapped on the bank of a swollen river for four hours unable to find safe ground.

Emergency responders reached the group of around 50 participants after the tour operator alerted local authorities to their plight along the Kanzakigawa river in the Yuzurio district here.

Rescuers from the prefectural police and local firefighters stretched a rope to the bank with a trail to bring the group members to safety.

Nobody was injured, according to local authorities.