Cosplayers from around the world converge on the streets of Nagoya

Cosplayers from various countries in colorful costumes parade along Osu shopping street in Nagoya’s Naka Ward on Aug. 7 as part of the World Cosplay Summit 2022. (Video by Tadashi Mizowaki) 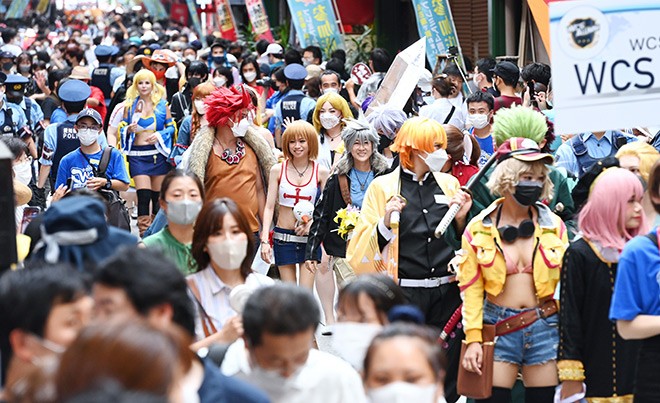 Cosplayers around the world parade along a shopping street in Nagoya’s Naka Ward on Aug. 7. (Takaki Furusawa)

NAGOYA--Cosplayers from around the world dressed as popular anime and game characters paraded along Osu shopping street in Naka Ward here on Aug. 7.

It marked the final day of the World Cosplay Summit 2022 held from Aug. 5 in Nagoya.

This was the third time in attendance for a 27-year-old woman from America living in Nagoya, who gave the name Linya.

She was clad in a self-made costume that the character Reimu Hakurei wears from the popular video game “Touhou Project.”

“I’m happy to see my cosplayer friends,” Linya said. “It was hot, but I’m glad I came here.”

Around 20 cosplayers from more than 10 countries, including France and Thailand, led the parade, which started at Osu Kannon temple in Naka Ward.

The World Cosplay Summit started in 2003, with cosplayers enjoying its 20th incarnation this year.

Osu shopping street--dubbed “Akihabara in Nagoya” with shops selling anime character figurines or computers--was packed with spectators, with many looking to photograph the parading cosplayers.

The mercury hit a scorching 33.9 degrees in Nagoya on Aug. 7, according to the Japan Meteorological Agency.

Cosplayers dressed as characters from the manga “One Piece” and “Demon Slayer,” both of which are popular overseas, were soaked in sweat but smiling and waving at spectators.