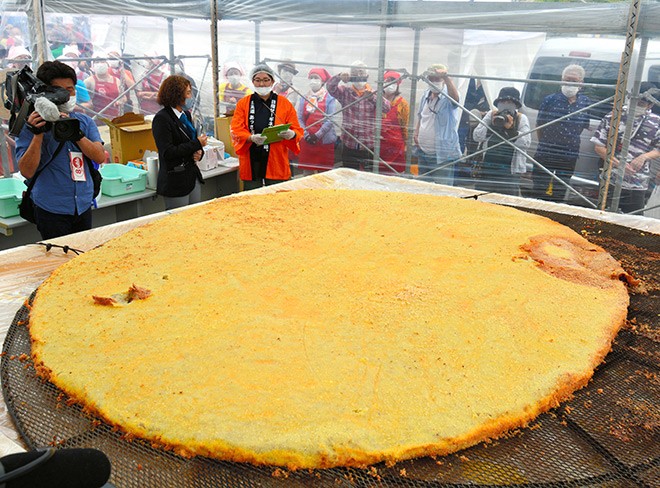 The jumbo-sized croquette is deep-fried to golden brown perfection in Assabu, Hokkaido, on July 23. (Hiroaki Abe)

ASSABU, Hokkaido--To create the largest croquette ever made, local residents here used 600 kilograms of potatoes, 50 kg of ground meat, 200 eggs and other ingredients.

Their July 23 masterpiece weighed 279 kg, breaking the previous 225.8 kg record set in the Netherlands, to win an entry in the latest Guinness World Records.

Assabu is regarded as the birthplace of the May Queen variety of potato used in the jumbo-sized croquette.

It took about an hour to form the dough into a disc shape with a diameter of 2.5 meters so it could be cooked.

The dough was then placed on a wire net and hoisted into the air by a crane before it was deep-fried in a large pot containing 1,100 liters of cooking oil.

Cheers and applause broke out when it was finished to golden brown perfection.

This year, they took a shot at setting a world record to encourage the registration of Assabu May Queen as a trademark.

The dish was cut into pieces to serve to the crowd of 1,300 onlookers who came to cheer the cooks on because it had to be eaten up to be certified as the world’s largest croquette.

“I’m so happy that our town’s renowned potato also played a part in claiming the world’s No. 1 title,” said a 67-year-old homemaker who lives in the town and visited the venue with her family.