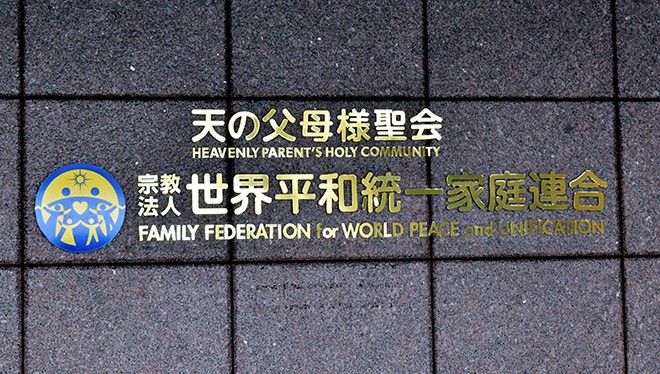 This building in Tokyo’s Shibuya Ward houses the offices of the Family Federation for World Peace and Unification, more widely known as the Unification Church. (Eishi Kado)

The Unification Church has quietly moved to lower its public profile after a raft of complaints from followers over the years that they were coerced or fleeced into giving vast sums of money to the organization through what is known as “spiritual sales,” according to a lawyers’ group.

Experts with a deep knowledge of issues involving the Family Federation for World Peace and Unification, as the group is now officially called, said the church decided to focus on collecting donations and responding to unwanted attention in a manner that is less likely to draw public attention.

“The reality of the situation is that the church is making every effort to ensure it does not have to refund the money it has amassed and that problems concerning donations will not surface,” said Daisuke Sasaki, a lawyer involved in a lawsuit demanding the refund of donations by a former follower.

A recent example of the church’s fraudulent approach involved a woman in her 70s living in Yamaguchi Prefecture.

In January, she contacted the National Network of Lawyers Against Spiritual Sales, a group that deals with grievances against the church.

Spiritual sales are among tactics the church has employed over decades to sell goods, such as pots, seals and other items, at exorbitant prices by playing on the fears of followers and other individuals.

The woman, who survives on a pension and part-time work, said she was told by a church follower she was introduced to by an acquaintance that she should donate money to the group to resolve a family matter.

“Many of your ancestors were short-lived and they are still suffering in the hell of the spiritual world,” she was told by the follower. “That is why your son could not get a job or a marriage partner.”

The woman said she became extremely anxious about her son and donated in excess of 10 million yen ($74,000) to the church over the course of several years up until 2020.

But she later demanded the return of the money, asserting that the follower coerced her into donating money to the church by fanning her anxiety.

The issue was settled out of court in April following negotiations involving a lawyer, and the woman was granted 9 million yen in settlement money.

The National Network of Lawyers Against Spiritual Sales has kept track since 1987 of the number of cases in which church followers or their relatives sought its advice.

Those cases can be broken down into 14 categories, depending on the content of grievance, such as “pots” and “donations.” In each category, the total number of cases and the value of damages were counted.

The data showed that in some years, more than 2,000 cases were taken to the network annually between the 1980s and 1990s.

The annual number of cases hovered around 1,000 during the 2000s and mostly concerned the sale of pots and other goods.

But in recent years, case numbers have plunged to around 100 annually, according to the network, with many of them concerning donations.

Hiroshi Yamaguchi, speaking on behalf of the network, said it had become more difficult to expose shady practices due to a shift in the way church gathers funds.

“The church has changed from spiritual sales, which leaves a footprint, to enforcing followers to donate large sums of money,” Yamaguchi said.

The lawyers’ group strongly suspects many similar cases exist that have yet to come to the attention of the network and the public.

A key reason for this, network representatives said, is the existence of a “statement of mutual agreement” between the church and former followers. This requires the latter give up their right to demand the return of their money.

A former follower in her 60s in Tokyo signed and affixed her seal to an agreement in 2015 that obliged the church to return around 2 million yen she had made in donations as long as she did not demand the return of the remainder.

The woman said her total donations from 2013 to 2015, when she left the church, surpassed 6 million yen.

She filed a lawsuit against the church, demanding the return of all the money.

A court ruled that the agreement is “invalid” as it “runs counter to public order and decency.”

The court concluded that the woman was forced to sign and affix her seal to the church document that waived her right to claim the money without an explanation.

Sasaki, who represented the woman in the lawsuit, said the network discovered the existence of a host of agreements on the no-return-of-money clause among documents submitted by the church side during the court proceedings. He said the network was unaware of such arrangements prior to that lawsuit.

The chairman of the Japanese arm of the church resigned in 2009 after a court found senior officials of an affiliated group guilty of illegally engaging in spiritual sales.

Following the court ruling, the church issued a declaration of compliance, maintaining it has transformed itself, including its approach to collecting donations.