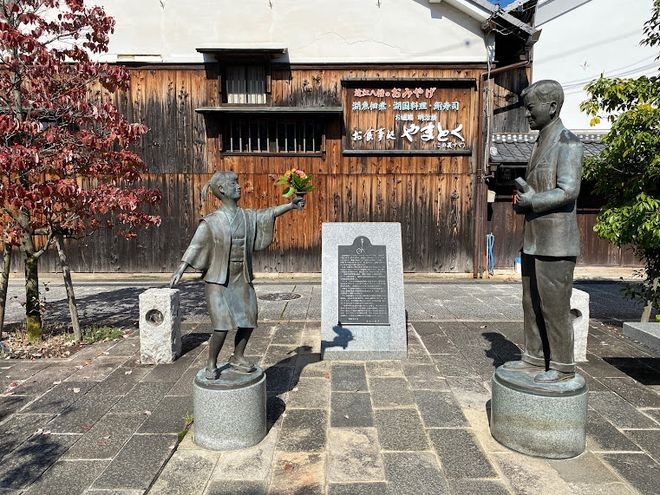 Two bronzes of a girl trying to hand a bouquet of flowers to American missionary William Vories stand near Omikyodaisha Mentamu Museum in Omihachiman, Shiga Prefecture. (Photo by Lisa Vogt)

Mentholatum or Menturm? Which of these nearly identical chap sticks with labels in dark green with white letters do you prefer? Have you ever noticed that one has a little girl dressed as a nurse on it, and the other a boy who’s supposed to be Apollo?

Yes, Apollo from Greek and Roman mythology, the son of Zeus. I’ve stared long and hard at that logo, and all I can see is a little kid pretending to be a Native American (Indian)! One chap stick is made by Rohto and the other Omi Brothers, but they both share the same roots: American missionary William Vories (1880-1964), who came to Japan in 1905 to work as an English teacher for a commercial high school in Shiga Prefecture.

Omi province was in present-day Shiga Prefecture. It is known for its excellent merchants with business prowess. Here is an impressive list of the big names that have roots in Omi: Itochu, Marubeni, Nippon Life Insurance, Seibu, Takashimaya, Takeda, Toyota, Sumitomo, Wacoal, Yanmar and more.

What made Omi merchants so successful? They understood SDGs, ESD, SRI and ESG, and CSR!

If all of these acronyms clicked right away, you’re with the times. For those with question marks popping up about 20 centimeters above your head, here is a crash course: SDGs are the world’s to-do list to make the planet a better place for all people. ESD is to encourage people to think and act responsibly. SRI and ESG are about investing in a socially and environmentally sound manner. CSR is about being conscious and accountable and giving back to society.

They focused on building long-term relationships based on trust and the conviction that all stakeholders should benefit--business has to be good for all four elements: the seller, buyer, community and the future (environment).

Old Western and Japanese buildings dot the immaculately clean historical streets of Omi. It’s one of the most picturesque towns I’ve visited in Japan. It has quaint shops and museums, boats on Hachimanbori Canal with its crystal-clear waters, and informative bilingual signboards throughout the town that explain the significance of different sites. And within walking distance are serene and sacred shrines and temples, plus the area’s most famous confectionery store with its you’ll-do-a-double-take building, La Collina Omihachiman.

Omi Brothers, maker of lip balm and more, started out as Omi Mission, which stands for “Operations on Mission Industry.” Honorable Omi merchants, Christians and not, accomplished their ethical and sustainable life missions for all.

This article by Lisa Vogt, a Washington-born and Tokyo-based photographer, originally appeared in the July 3 issue of Asahi Weekly. It is part of the series "Lisa’s Wanderings Around Japan," which depicts various places across the country through the perspective of the author, a professor at Meiji University.