VOX POPULI: Even in death, a tree in Nagasaki teaches horrors of the A-bomb 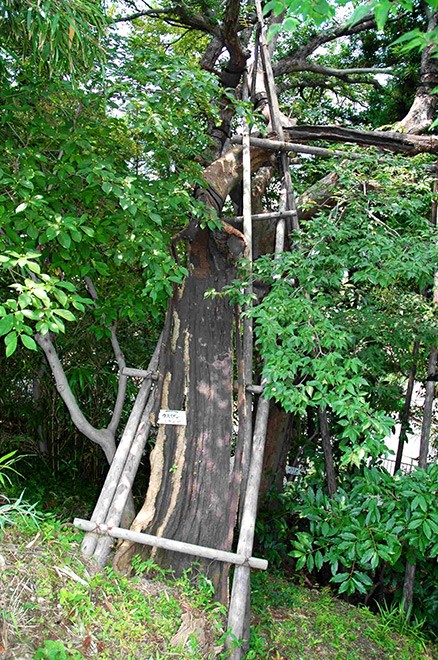 An atomic-bombed “karasuzansho” (Japanese prickly ash) tree, supported by a “muku” tree behind it, stands on the grounds of Shiroyama Elementary School in Nagasaki in 2007. (Asahi Shimbun file photo)

I got a close look at a “karasuzansho” (Japanese prickly ash) tree that died at the presumed age of 130 in Nagasaki.

It was long known as the city’s iconic “hibakujumoku” (atomic bomb survivor tree).

The trunk was charred and split in the middle, and the bark was pitifully twisted.

The tree, which stood on the grounds of the former Shiroyama National School near ground zero, was exposed to the atomic bomb’s blast and heat rays.

It miraculously survived, leaning against a nearby “muku” tree that spread its branches out like open arms.

With new buds every spring, the tree encouraged Nagasaki citizens.

But a change occurred in spring 2016. There were no new buds after a cold spell.

“A tree doctor examined the root system and gave a medicinal coating, but the tree could not be saved from withering and dying,” said Matsuyoshi Ikeda, 84, the facility director at the peace memorial hall housed in the former Shiroyama National School building.

Some Nagasaki citizens felt there was nothing they could do about the tree.

But others wanted to preserve this survivor tree somehow, and their wish came true last autumn when the peace memorial hall added the tree to its exhibits.

Ikeda was 7 when the atomic bomb exploded with a flash over Nagasaki 77 years ago on Aug. 9.

He lost his parents and great-grandmother, and he grew up being shunted from one relative’s home to another.

“The twisted tree looked angry,” noted Ikeda. “But it also appeared determined to survive and that really spoke to me.”

All objects that bespeak to the destructive power of an atomic bomb wither away over time.

Year by year, the effort increasingly becomes important to ensure that the horrific damage done by nuclear weapons will be permanently recorded in the history of the human race.

Nagasaki’s atomic bomb survivor tree will never again bask in the sun or grow leaves, but it will continue to live with its eternal mission as an “atomic bomb witness.”