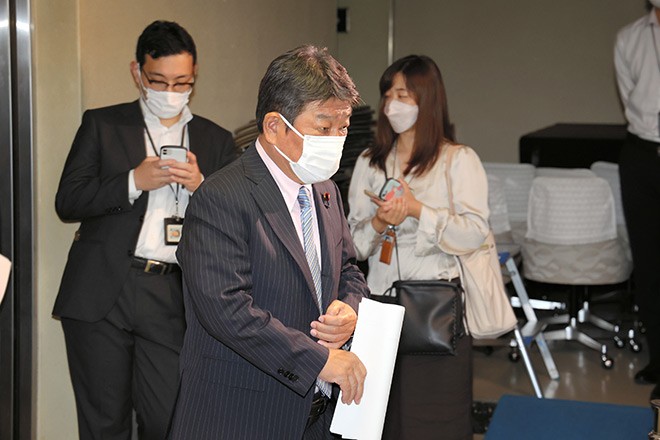 Toshimitsu Motegi, the secretary-general of the ruling Liberal Democratic Party, arrives at a meeting held on Aug. 8 at the party’s headquarters in Tokyo’s Nagatacho district. (Koichi Ueda)

A top official from the ruling Liberal Democratic Party says the party will urge its politicians to review their dealings with the former Unification Church and sever any ties with the controversial religious organization.

Secretary-General Toshimitsu Motegi said at a news conference on Aug. 8 that the party will send a notice to its lawmakers urging them to conduct their own reviews into involvement with the former Unification Church, now known as the Family Federation for World Peace and Unification.

“It is the politicians themselves and their offices who know the situation,” Motegi said.

Motegi said the party will send them a notice urging them to “check the facts and conduct an adequate review,” and added the party will urge them “not to have a relationship with (the church), basically.”

But he did not say whether the party will conduct interviews or lead the review process.

During a party board meeting held just prior to the news conference, Prime Minister Fumio Kishida instructed LDP Diet members to check into their history with the church.

Opposition politicians have called for an investigation by the LDP into its lawmakers’ links to the group since it came to light that a number of its politicians had attended events related to the church or received its support during their election campaigns.

The ruling party has come under pressure over interactions its lawmakers have had with the group since the slaying of former Prime Minister Shinzo Abe, after which it was revealed that the shooter held a grudge against the church and believed Abe was connected to it.