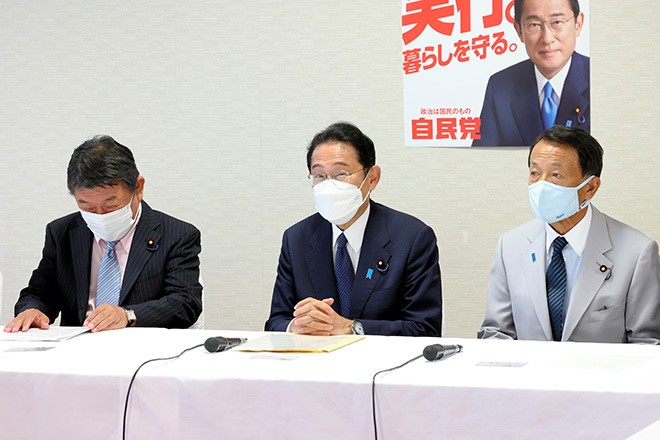 But at his own Aug. 8 news conference, Hagiuda indicated that he wanted to remain in his post as economy minister.

“I am worried if my replacement would be able to handle the various issues,” Hagiuda said.

Kishida is expected to reshuffle the LDP executive lineup on Aug. 10, and several administration sources said the prime minister wants Hagiuda as the party policy chief.

Hagiuda belongs to the LDP faction once headed by former Prime Minister Shinzo Abe, who was fatally shot on July 8 in Nara city while giving a campaign speech.

Naming Hagiuda to one of the top party posts would allow Kishida to show he was still placing importance on the largest LDP faction.

According to sources, Kishida and Hagiuda met on Aug. 7, and the policy chief post was likely offered to the economy minister.

Hagiuda, however, cited the many difficult tasks he currently faces.

The surge in consumer prices due in part to Russia’s invasion of Ukraine means that additional economic measures will be required in the months ahead.

Hagiuda also noted that he was put in charge of implementing a green transformation policy after the LDP’s victory in the July 10 Upper House election.

Kishida has pushed the green transformation policy as a key pillar of his “new capitalism.” It involves promoting the eventual construction of new nuclear reactors to replace old ones as one way to reach a carbon-neutral society.

But public opposition to nuclear energy remains strong, and the minister in charge of the green policy will have deal with critical questions in the Diet from opposition parties.

An inexperienced politician in this post could prove to be an Achilles’ heel for the Kishida administration.

Ryu Shionoya, an executive of the Abe faction, also met separately with Kishida on Aug. 8 and presented the faction’s requests regarding personnel changes.